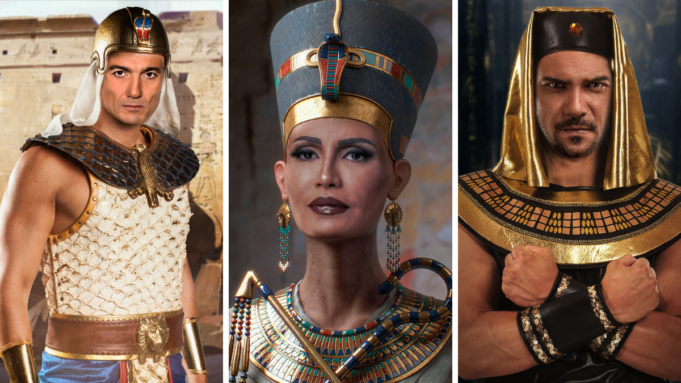 No one’s more proud of their history than Egyptians are. Considering that very rich history, you won’t have to fact-check this twice. But here’s the thing — we’re really apprehensive about showing this history on the big and small screens.

See, if we really have to say it, we just have to be honest: not everyone can play a pharaoh. It just needs a special factor not everyone has and that’s okay.

But have you ever thought about the actors we have who can ACTUALLY play pharaohs? Because we sure did and we put a lot of thought into it — and yes, you’re about to find out who we picked!

For this imaginary casting, we collaborated with graphic designer Mahmoud Sorour in order to bring you the best visuals.

You must have thought about it at least once. Don’t be surprised we’ve all thought about it too. It’s not exactly shocking, what with Asser Yassin’s penchant for regal-ness and the fact that he’d pull off the period’s costumes rather well.

It’s said that there’s a curse that’ll be placed on you if you don’t include Sawsan “Escapee from the Museum” Badr in a list like this. But all jokes aside, No one will pull off the pharaonic look more than she will and you know it.

Look, you might have reservations on this one, but come on. The man’s talented and period-acceptable. Once he’s given a proper Ancient Egyptian script, he’ll work his magic so hard you’ll see a proper Akhenaten type right in front of you.

Who’s a better fit for a Pharaoh-like role more than Asmaa Abulyazeid, the actress who literally played an Ancient priestess who spoke in Coptic in a show before? That’s what we thought too.

Sure, Khaled El-Nabawy already has had a stint in the Ancient period setting before but that doesn’t mean he can’t do it again. He’s just that good and you don’t need to think twice to imagine him in a Pharaoh’s shoes!

Combining a rare set of acting skills and era-fitting looks, Salma Abu Deif will probably kill it in a role set in Ancient Egypt. Just think of the possibilities.

Another actress with heaps of elegance, Arwa Gouda doesn’t need much to convince us she has what it takes. We’ve already seen her in quasi-historical dramas and if she ever gets to play a Pharaonic woman, well, we’d be the first to say we told you so.

Era-specific and princess-like, Huda El-Mufti will be doing everyone a favor if she takes on a Pharaonic-times role. Who knows what dynasty she can land!

See, we told you they’ll pull this off!