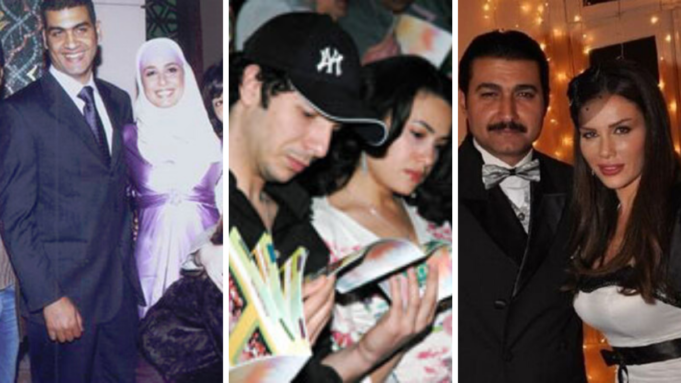 Celebrity life is hard to keep up with. What, with all the projects and events and red carpets and who’s-dating-who, it’s bound to get confusing every once in a while. This is especially true for celeb couples, though.

We think we won’t be surprised anymore but we’ve recently discovered that there are some couples we’ve all but forgotten.

This one may seem odd considering where both halves of this pair are now, but it really happened. Before Mohamed Fouad was a failed prank show host, he used to be engaged to the one and only Sabrine, something which caught everyone’s eyes back in the day.

Sabrine was Egypt’s sweetheart from a famous showbiz family and Fouad was a promising, upcoming singer. Their story ended after a short engagement.

Things were different back in the day. Zidane was killing it and Ezz El-Din was still more liked than cringed at. For lack of better words, a lot of people thought they were cute together, on the way to becoming a Posh Spice and Beckham kind of deal.

Then, of course, a whole lot of issues around Zidane’s love life abroad came into question and the rumor-mill began and never stopped.

Ahmed Helmy and Mona Zaki are a couple so established, it’s kind of hard to picture either with someone else. Yet it happened.

Mona Zaki had been engaged to actor Mohamed El-Shakankiry, though they later broke it off for personal issues. Since then, Zaki had said she’d been engaged to the actor when she was 16, so really, we’re all thankful this didn’t go through.

This one relationship sounds honestly a tad off because we don’t remember it happening, even though it’d been in 2011.

Here’s another thing we don’t remember. Nicole Saba and Yasser Galal starred in a show together, which was where the romance originally blossomed.

Although Hanan Motawei’ is currently happily married with a newborn, there was a time when her future might have gone a little differently.

While shooting the movie Ewa’a Weshak, Motawei’ and Ahmed Rizk felt a spark and quickly got engaged. Apparently there were no hard feelings since Rizk married someone else 7 months later.

A whirlwind of a romance, this short relationship between Menna Shalaby and Khaled Youssef was a blink and you’ll miss it kind of thing.

According to Shalaby, they met on set in the mid-2000’s and quickly fell in love, though they broke up shortly after, citing personal reasons.

Yes, this was a thing and guess what? It’s been thirteen years since these two have been legally married. We’re aware we’re shocking you too much now, but bear with us.

Here’s how the story went. Hany Adel and Hala Shiha met, fell in love, got married and were on a steady enough rhythm supposedly until they had a huge fight. They divorced a few days before the actual wedding.

That feels like a lifetime ago and we’re kind of positive neither star even thinks about it much. It’d been a rather short engagement, too.

We know these two stars aren’t Egyptian, but we just couldn’t resist. Can you remember a timeline where Hend Sabri and Bassel Khayyat were engaged?

Well, neither do we, but it happened anyway and apparently none of us knew about it.

Time really does change everything. Would you have thought any of these people were together?