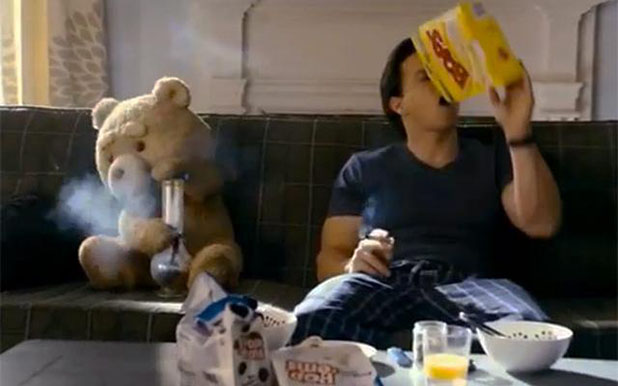 Sometimes people just really want to get high, and they will try just about anything to get their fix! And I mean just about anything. These people don’t just resort to the traditional drugs we know of; they’re wiling to try weird and strange methods to achieve their high! Even if it involves sniffing chocolate!

Popularized by the Simpsons, this process was something that hippies actually discovered. Because toads release venom on their backs, licking the toad was thought to get you high. But the truth is, only one kind of toad’s venom can actually do that… and no you don’t have to resort to licking them! If you have to go hunting for forest toads to get high, something tells me you might already be high!

So apparently there’s a substance called Bananadine in banana skins and if you collect about 15,000 banana skins, boil them, bake them, make a powder out of them and smoke that powder you will likely not get high because Bananadine is not a real substance.

This is a new craze that’s turned up quite recently. People are actually purchasing raw cocoa powder to sniff! The thing is, I’m already addicted to chocolate without the need to sniff it!

This was called Beezin’. Basically what you did was put Burt’s bees lip balm on your eyes. If you’ve ever tried this lip balm, you’ll know that it’s made with peppermint oil which is more likely to make your eyes burn and less likely to give you a buzz.

This practice originated from the Eskimos! Legend states that the deer’s urine induced a drug like high because the deer themselves consumed hallucinogenic mushrooms. So for this weird drug, you not only have to find a deer, but a deer that ate magic mushrooms!

Another strange practice. I don’t know about you, but I’m 100% sure that’s not how you consume a Twix bar!

Another thing people have tried to smoke! Let’s just leave the nuts for the squirrels PLEASE!

This kind of high requires that you search for binaural sound waves on the internet and listen to what basically sounds like techno in the hopes that it would induce hallucinations or some kind of buzz. What you usually get is a headache because there’s a lot of beeping.

Well, I don’t know about you, but after discovering that real people have actually tried to do these things, I don’t wanna live on this planet anymore!