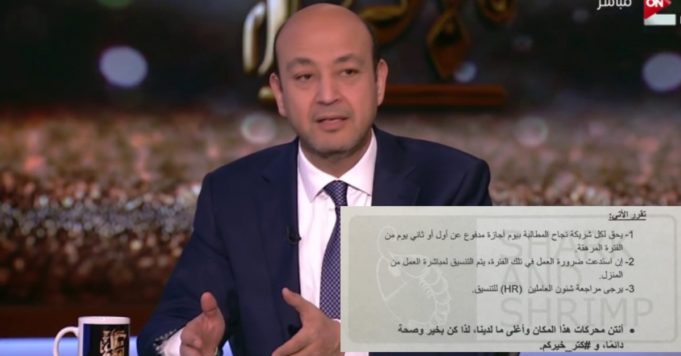 If you follow social media or our articles, then you probably know by now that some female activists have started a movement seeking implementation of the Menstrual Leave system in Egyptian workplaces. You probably also know how most people (men) didn’t seem too excited about the idea.

But aside from the social media craze that unveiled the sexist-est of the sexist, an Egyptian company called Shark & Shrimp took initiative and actually did something about it.

We have to say, we are extremely happy about it! One person, however, seems to be bothered by this. This person is Amr Adib.

After that very dark and very sexist cloud, a silver lining arouse. That was when the Egyptian Marketing Agency Shark & Shrimp declared an official decision that they will be implementing the Menstrual Leave system for their female workers effective April 1st, 2019. This makes them the first company to ever do so in Egypt and the Middle East.

In the statement they released, they point out how important women are to their production and success and acknowledge the difficulties women face during their menstrual period, titling their document “The Exhausting Time”.

They also explain how exactly their new system will work, in that every female worker is entitled to have the first and second day of her menstrual period off, and if there is a work emergency, they can arrange with their HR department to work from home.

The company received well-deserved praise for their respectful decision from their workers, and some of the public.

But needless to say, not everyone was on board…

After Shark & Shrimp revealed their decision, the Menstrual Leave conversation on social media was stronger than ever. This caught the attention of one renowned male talk show host who decided to weigh in on the subject, or “the noise” as he put it.

In a recent episode of his talk show “El Hekaya“, Amr Adib discussed Shark & Shrimp’s decision, and how more people are asking for the same to happen all over Egypt and how this will affect the country in a negative way.

Here’s what he had to say about it. Note: he who is NOT a woman…

Before we talk about what is ethically wrong and offensive in Mr. Adib’s words, let us do a quick fact-checking.

Experienced talk show host, Amr Adib, starts by saying that Shark & Shrimp, or “that Egyptian company” is giving their female workers an entire WEEK off every month for their menstrual period. Which will make women work for only three weeks a month.

Which is by a quick look on the company’s official document -which is being shared everywhere- can be proven to be incorrect. Since they SAID that they’ll only give their female workers two days off every month, and if the work requires it, they can even work from home. 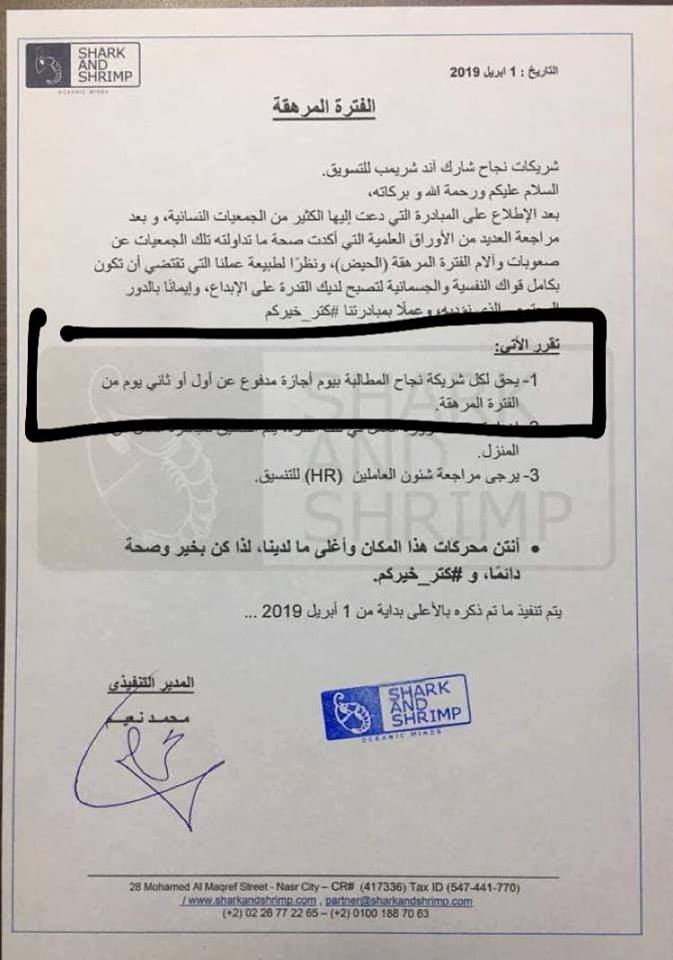 While expressing his “shock” in how ‘unreasonably’ demanding people/women are being, Amr Adib asked about other countries that implement this system, as a part of his claim that no other countries do.

Also by a quick look at Shark & Shrimp’s document, our latest article on the topic, or I don’t know… the Internet, you’d know that several countries across the globe already have an effective Menstrual Leave system.

In fact some of the world’s most leading and developed countries  like Japan, South Korea, Taiwan, Indonesia and China do. That is in addition to several European countries who are in continuous pursue of legalizing that same system.

In his “speech”, Amr Adib said that if women get a menstrual leave, that would be unfair to men, and would breach the gender equality everyone keeps asking for.

Well, we couldn’t really wrap our heads around this one, but do men experience unbearable pain in their bodies on monthly basis too? Last we checked they don’t, but if they do, by all means they take all the time they need to heal off.

Among his casual insults, he also degrades maternal leaves -which women take to push a human baby out of their bodies-, and comments saying “Is this a developing country or a sleeping one?”.

Then right after he said that he truly appreciates women. Well, if you say so…

Mr. Adib continues to get on every woman’s nerves by ignorantly saying that “Just like a woman has a monthly menstrual period, a man has monthly expenses. Which is EXACTLY the same.”

Well, we weren’t that great in biology, but we remember vaguely that a monthly menstrual period entails that a woman bleeds every month, and monthly expenses entails a person pulling money out of their pockets.

From the looks of it, they don’t seem to resemble very much, or… at all.

Several scientists and doctors have done research about menstrual pain and proved that this “little pain” can be “almost as bad as a heart attack”, while monthly expenses hurt your bank account. We are almost sure it is not the same thing.

Last we checked, both men and women have monthly expenses, since you know, we are not in the 19th century anymore.

Why this is not okay?

All this evidence, as well as what Mr. Adib had to say about the matter, only prove our original point, which is that most men don’t understand, or care to understand, nor appreciate, nor even respect the struggle women face in their lives, on a MONTHLY BASIS.

However, while it is still not okay for a person to rant on about their sexist views in the comments section of some Facebook post, it is so much worse for a public figure with an official public platform and a huge audience to do so.

It is not okay for a person in the spotlight to publicly declare their opinion about such a sensitive matter while being completely oblivious to whom these words are affecting, nor caring about whether or not their facts are actually correct.

Lastly, a personal message to every man who decides to weigh in on the topic; if you don’t know how it feels, you don’t get to decide what needs to be done! Thank you!