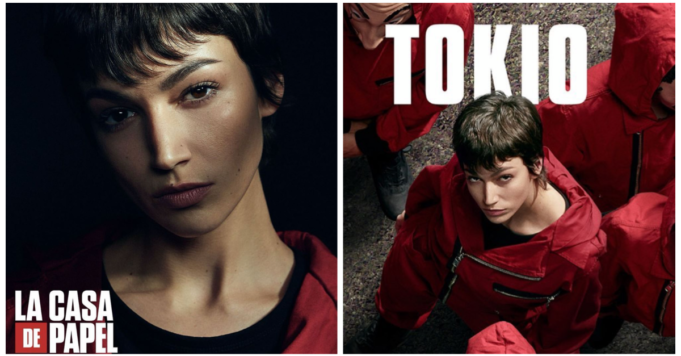 From Elite to Narcos, Toyboy and many more; Netflix has given a lot of Spanish shows a huge platform to go international and break records all around the world.

And just as we exclusively spoke with Álvaro Morte, El Profesor on “La Casa De Papel“; we also had the opportunity to interview the one and only Úrsula Corberó who plays everyone’s favorite Tokio on the Netflix series.

Córbero had a lot to say to us about Season 4, her character on the show, Tokio and Rio’s ‘toxic’ relationship, her favorite co-stars and much more!

1- Tokio, your character on the show has a lot of very significant traits. A lot of people argue whether or not she’s a good person and if her flaws are worth it.

In your opinion, what’s the best thing about Tokio, and what’s the worst?

I honestly like how Tokio is a very strong character. Her strength, courage, and bravery are what I really like about her. However, what I could say I like the least about her is the fact that her strength sometimes becomes a shield that doesn’t allow her to show or reveal her vulnerability.

2- How do you see Tokio and Rio’s relationship? Some people would say their relationship is toxic, considering everything that went down in Season 3 as we all saw. While some others would say that their love should live on and that they’re meant to be.

What about you? Where do you stand on this? And do you see a future for them, especially after Rio’s decision of breaking up with her?

I too have been wondering about whether or not this relationship is toxic. With Rio’s vulnerability and Tokio being very protective of him, we can see that from the very beginning. But perhaps it’s a bit toxic because of Tokio’s personality.

For their future, of course, I do know how it’s going to go from here. But I don’t want to give anything away. The audience will have to see for themselves.

However, the way I see it is that there are like two teams – and we can see this very clearly on social media. Some people want Tokio and Rio to reunite and get back together and some others are very much against this relationship and don’t want them together ever again.

3- For you, which scene has been the hardest to shoot out of all the seasons and episodes of “La Casa De Papel“?

It’s very hard to choose. There were a bunch of hard scenes, to be honest. But yes, I could think of the scene from Season 3 when we were all on the boat, and then the professor says “We’ve crossed international waters”. This is when we were fleeing from the Royal Mint of Spain.

We were shooting then at the high seas in Thailand wearing winter clothes in 45-degree weather, and many of us were vomiting because of the high waves. Miguel had a heat stroke. And when we landed, I wasn’t feeling very well. It was one of the hardest scenes, I would say. You could say it was the throwing up scene.

4- What can you tell us about the fourth season of the show?

It’s honestly extremely chaotic. And you will see how the characters will be pushed to their limits and forced to make very strange and bizarre decisions. No to mention that great amount of conflict that will arise within the group.

On top of that, the newly recruited character Gandia, played by José Manuel Poga in Season 3, is going to become more and more important during the fourth season as he brings terror, which is perhaps the only genre that wasn’t present in the series up until now.

5- Do you see how the fans are on social media; how they react to the series and how they are so dedicated to it? How do you feel about the crazy amount of love “La Casa De Papel” has been getting so far, due to its huge success all around the world?

Well, it’s absolutely crazy. Before “La Casa De Papel” or “Money Heist“, the comments I always received were only in Spanish, of course. Now, some of them are even hard for me to understand because they’re in Arabic, Russian, you name it. We can see that the series has gone international and has broken barriers. And I feel very proud and very grateful, of course.

Not only can I see this by reading the comments on social media, but also when I travel abroad, people come up to me and acknowledge the work we’ve done. Which is really beautiful!

6- Who’s your favorite co-star? The one you have the most fun with behind the scenes and while shooting on set?

Oh no, don’t do that to me!
Well, let me tell you, perhaps it’s related to the fact that I share most of my scenes with them but for me, the perfect mix would be Miguel Herrán, Jaime Lorente and Rodrigo De La Serna. When all four of us are together, we’re like fireworks!

We had so much fun interviewing and chatting with the beautiful Úrsula.
Stay tuned for the rest of our exclusive interviews with the amazing cast of Netflix’s “La Casa De Papel“! And let us know in the comments if you enjoyed Season 4 and if you have any questions for the stars of the show!