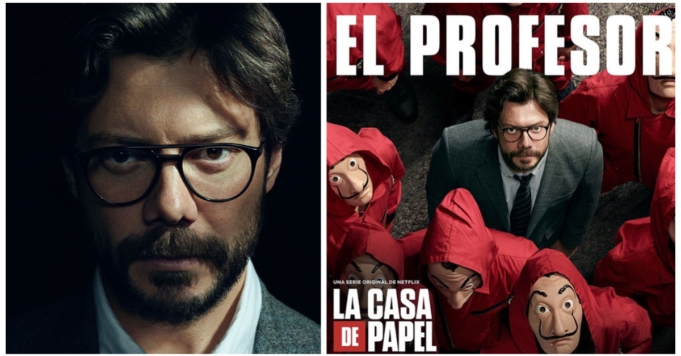 From Elite to Narcos, Toyboy and many more; Netflix has given a lot of Spanish shows a huge platform to go international and break records all around the world.

And with the fourth season of Netflix’s fan-favorite Spanish show “La Casa De Papel” or “Money Heist” premiering just a few days ago on the streaming service; there’s no better timing to release our exclusive interview with the mastermind behind the heist, Álvaro Morte, who plays the one and only “El Profesor” on the show.

The Spanish actor talked to us about his unique character on the show, the long-awaited fourth season, the most difficult scene he shot, his favorite season from the series so far and a lot more!

1- Tell us one thing you like and dislike about the professor’s character on “La Casa De Papel“.

I like many things about the professor but mainly his patience and capacity to work. He’s an intelligent guy. I mean, he’s spent years just working on a plan. And you know, Picasso, the Spanish painter once said: “If the inspiration comes to me, I want to be working at that time.”

The professor is the same. He’s not waiting for inspiration to work; he’s already working very hard. That’s something I like very much about him. Intelligent or not, he’s a hard worker.

However, maybe there’s one thing I don’t like about him. Even though I know it’s special [necessary] for the character. But he’s so emotionally closed off.

He should be more relaxed in terms of meeting people or enjoying a party. You see him dance and you know he dances because he has to, not because he wants to. I’d like him to open up, maybe just a little bit.

2- What should we expect from the fourth season of “La Casa De Papel“?

The nice thing about it is that you can’t expect anything. Because it’s going to be one surprise after another and so on.

This season delves a lot into the emotions of the characters and the action is also coming back again. I’m pretty sure the audience is going to enjoy both the emotional and the action-packed part of it.

3- Can you tell us whether or not we’re going to be seeing any major change in the professor’s character? Maybe a side of him that we’ve never seen before?

If I tell you, I’ll spoil everything. But I’ll say that it’s always a nice thing to push characters to their limits, to the edge. And the professor is one of those, he’s pushed to the point where he’s about to collapse but you’ll still never know what can happen next.

4- Even though the professor is the antagonist of the story, we still sympathize with him, big time. Why do you think that happens?

Well, I think that we all have this fantasy of “What if we make this robbery and steal millions and millions without hurting anyone, and hit the Spanish corrupted system at the same time?”

I think that the professor puts on the table those thoughts of “Hey guys, we’re living in a society and we know that some things are wrong; why don’t we react to that? We should and we could do it”.

The professor and his band, they are basically no one. They have no power at all. And even with that, they could react to that system and they’re rebelling in their own way. So it’s a revolution, you know? It’s something that everybody would sympathize with.

5- Throughout the past three seasons, the professor still had this ethical side of him; the rule of not hurting people and not wanting to murder anyone. But at the end of season three, after Raquel got caught and after being tricked into believing she was murdered by the Spanish authorities, he basically declares war.

What do you think that says about Sergio/the professor’s character development?

Yes, and actually not only the professor but all the other personalities on the show have gone through some evolutions and developments as well. Because otherwise, the characters will be flat. And we need to surprise the audience, we need to take them out of their circle of confidence. Which is interesting.

For example, with Raquel, the professor has always been alone; with no love, no relationships, no partners. Just planning by himself. And suddenly, he’s not alone.

I think everybody thought that Raquel and the professor will be the perfect couple but they’re not. They have their issues, problems and troubles.

That’s why the professor, for instance, felt really bad when he tried to apologize to her by the tree after the heated discussion they just had. And that’s why when he thought she was dead, he felt so awful about the discussion they had earlier. He wished it would’ve gone differently.

6- So far, which scene was the hardest for you to shoot?

Definitely the scene in Season 3 where the professor hears the gunshot that kills Raquel. I remember working with the director and discussing how we can do this and how we can derive a shocking, unreal reaction from the professor.

He hears the shot and it comes like an arrow to his chest, and he’s even more shocked as he hears the second shot and then falls to his knees while making this strange face that’s full of horror – but without even being able to cry.

And that’s when something changed in him and you can see it as he tells Palermo that the war has begun.

7- Which season of all four has been your favorite, so far? And why?

For me, it has to be the first one. Because it was the beginning of everything. Back then, we didn’t have any media or fan pressure. We were just trying to do our best without knowing at all that it would become the huge success it is today. So, we were just enjoying the fact that we’re shooting “La Casa De Papel“.

We were still discovering who the characters were and how they are. For example, I remember working with Pedro Alonso, the actor who performs Berlin; it was our idea to be brothers in the plot because we were performing alongside one another as brothers. So they had to write that in because we were already working in that direction.

So, in the first season, we were all building up the foundation of the series. Therefore, that emotional connection or reason is why the first one is my favorite.

We had so much fun interviewing and chatting with the one and only professor – who’s not only the sweetest ever on screen but in real life as well.

Stay tuned for the rest of our exclusive interviews with the amazing cast of Netflix’s “La Casa De Papel“! And let us know in the comments if you enjoyed Season 4 and if you have any questions for the stars of the show!