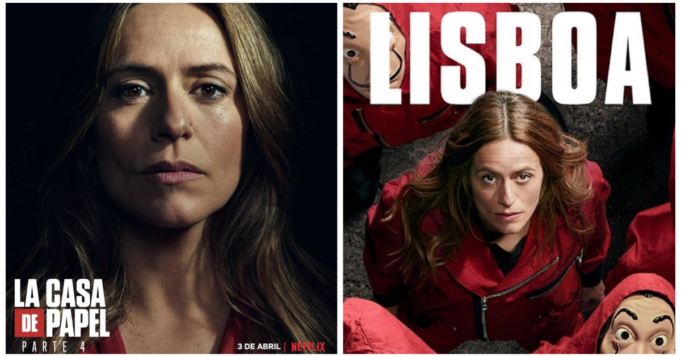 In continuation of our exclusive series of interviews with the cast of the critically acclaimed and globally-praised Spanish show, we spoke to Spanish actress Itziar Ituño who plays Raquel – now Lisboa. And she told us a lot about her character development on the show, what the huge success of the series means to her and a lot more!

1- Raquel – now Lisboa, is such a strong character on “La Casa De Papel”. What do you feel is very significant about her persona?

I really like Raquel’s strength and find it very significant. As well as the fact that she’s a genuine woman, in general – and that she’s also always in touch with her real self.

2- From being a police officer to switching sides and becoming part of El Profesor’s band, Raquel’s character went through a very clear shift. What do you think that says about her character development?

To be honest, I don’t think that Raquel’s character changed at all or that the shift she underwent resulted in a change in personality. Raquel has always been the same person, however, her perception of the world around her [and everything going on] is the one thing that [drastically] changed.

Actually, what I like about her is that even though the world around her changed, she didn’t. She’s always been the same person. [So she didn’t switch to El Profesor’s side because he changed something in her or influenced her way of thinking, but because that’s who she’s always been.

3- Before reading the script and knowing how the events were going to unfold, did you see that shift [switching sides with El Profesor] coming?

In all honestly, not at all!

4- What do you think of the huge fanbase “La Casa De Papel” has gained over the years?

The recognition the show is currently getting is definitely making me extremely happy, and I’m very grateful for the reactions and acknowledgments. It’s all so unreal.

5- So far, which season has been your favorite?

The second season was the one I enjoyed the most. I really had so much fun filming it. Season one had some really great moments as well. But if I had to pick, it’d be the second one!

6- What are you most excited for people to see in Season 4? And is it going to answer the fans’ burning questions?

It might answer some but leave them hanging with even more questions until the next one. That one I don’t know about! However, what I can say is that this season is going to be really hard for everyone, [in terms of what each character is going to go through, including Raquel, especially after she’s been caught by the authorities].

7- We’re pretty sure you guys all have so much fun shooting together and it really shows. However, you gotta have at least one or two favorite co-stars. Who are they?

We all have some great moments together on set. And in general, one always tends to have some unique good moments with different people throughout the shooting process. But I really do appreciate all of them!

It was a pleasure interviewing and chatting with Itziar whose acting performance made us fall completely in love with Raquel and her romance with El Profesor.

Stay tuned for the rest of our exclusive interviews with the amazing cast of Netflix’s “La Casa De Papel“. And don’t forget to let us know in the comments if you enjoyed Season 4 and if you have any questions for the stars of the show!