Another Facebook craze is on the horizon and we have to say, this one is scaring us more than most.

We contacted Menna Salah Negm who wrote the post, to get more information about the original post, however, we were not able to reach her.

According to Menna who is also a positive parenting specialist, the original post was of a mother complaining about her son who doesn’t listen to her and is giving her a hard time.

So she wrote a random Facebook post asking random people to give her random parenting advice. And this was the result, or at least the part Menna shared with us.

Tying up, locking up, and abandoning…

Someone suggested to the mother that she ties up her child, lock him up in a room, ALONE, and then leave him to go out with the rest of her children.

And after coming back, she should tell him how much fun she had without him, and warn him that she will continue to do the same if he doesn’t listen to her. 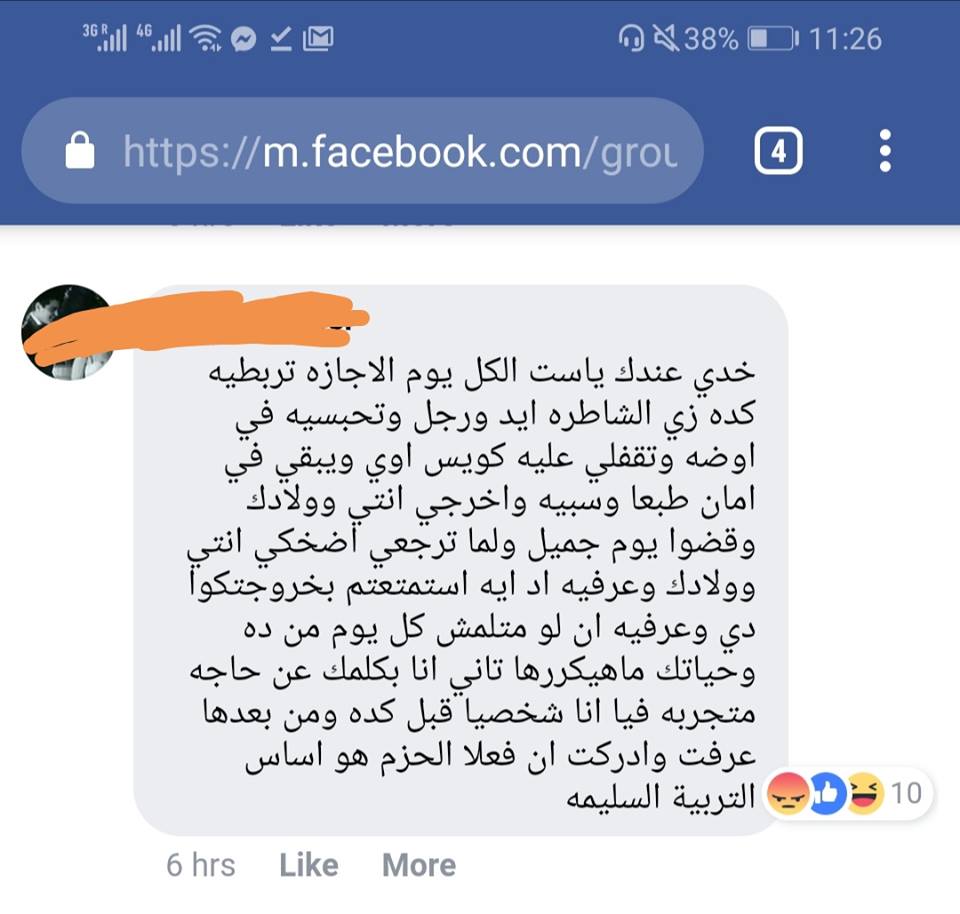 Apparently, this used to happen to the person who wrote the comment and the saddest part is that he\she agrees that this was the right way to raise him\her.

Someone -so proudly- suggested beating the child and locking him up, and depriving him of every basic joy in life except food and water “like a dog“. Yes, she literally said “like a dog”. 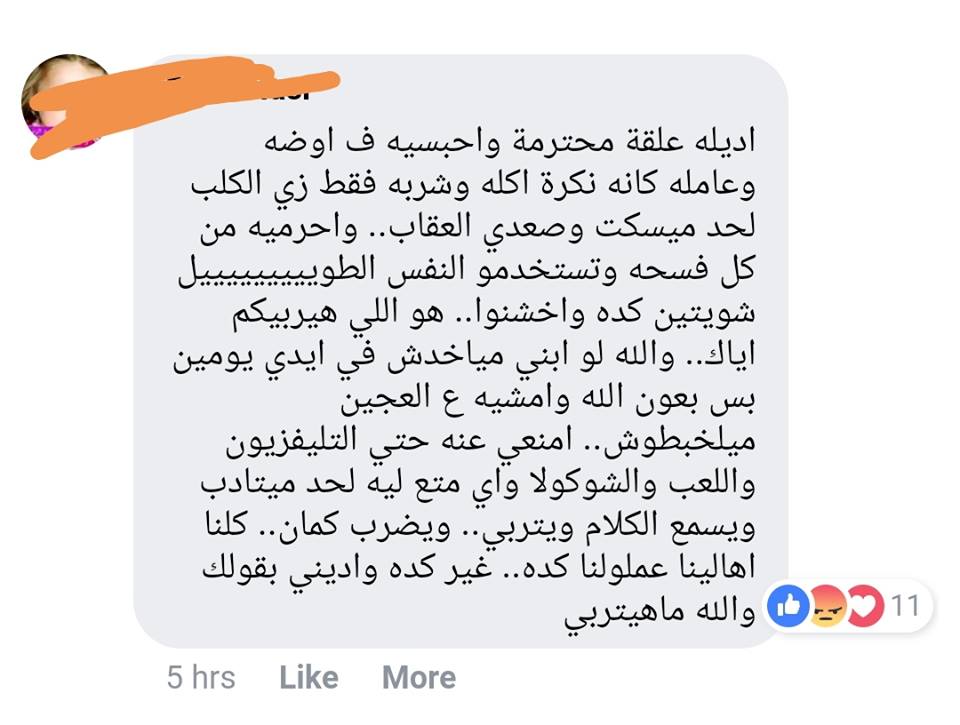 Make him hate you and his siblings

Again with the abandoning technique… Another person suggested that the mother also take the child’s siblings out leaving him behind, ALONE.

And to make the psychological damage even stronger, she should verbally express how much fun she had with his other siblings because they are “better than him” and to say that she will always take them out and leave him alone if his behavior doesn’t improve. 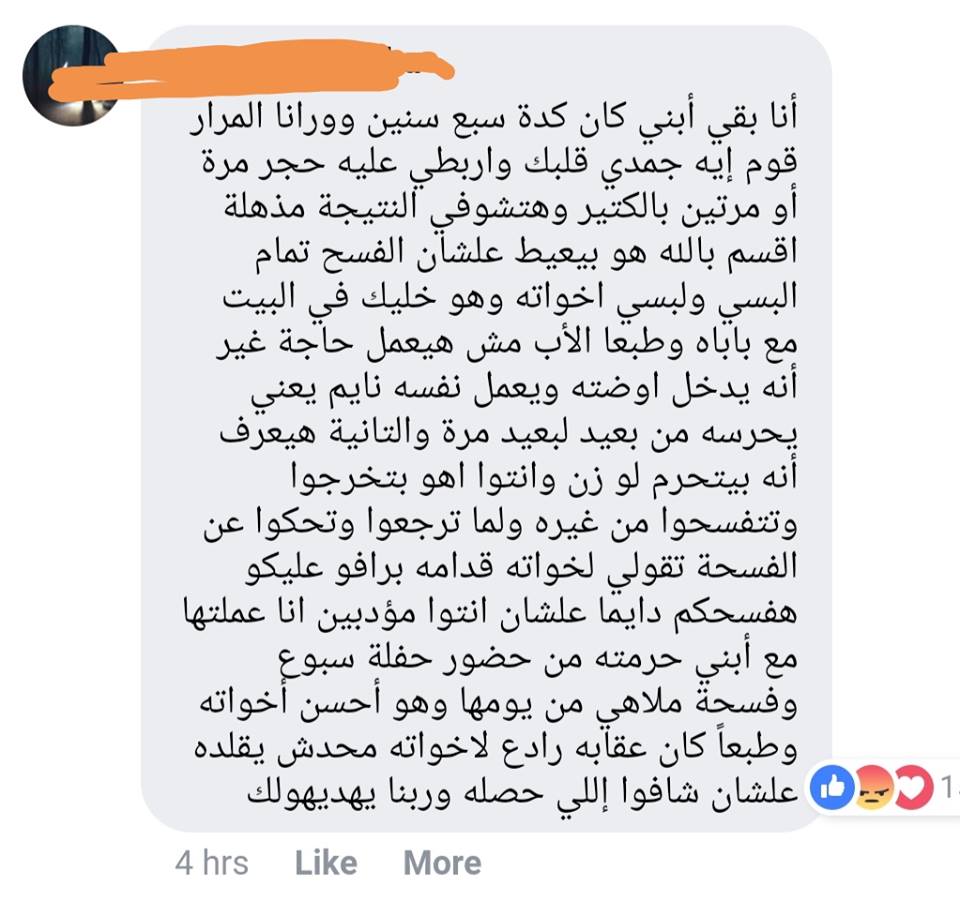 Scary thing is; apparently, that’s what this person has done with her son…

This person’s advice is tie up the child, place food and drinks in front of him (for extra mental torture presumably) and leave him like this for a day or two.

Another suggestion was to pull him out of school and make him work to “scare him straight”. 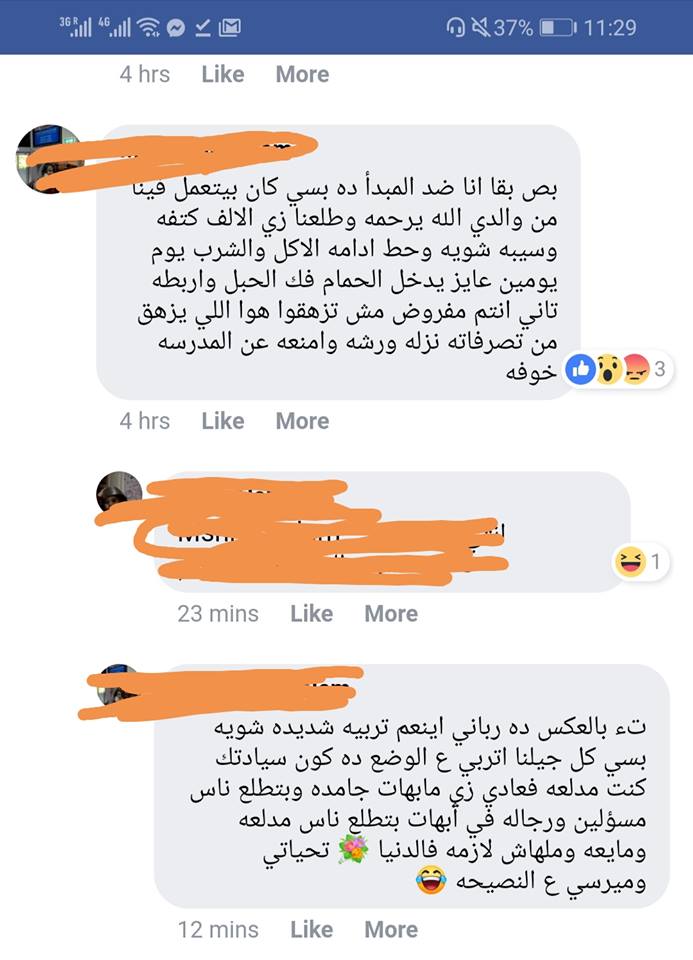 The terrifying thing is that when someone seemed to disagree or object to this person’s suggestion, she\he defended this by saying this is how their father did with them which is why they turned out “good”, and that any other way of parenting will produce spoiled and good-for-nothing-people.

Yes, This is WRONG

I can’t believe we still need to point this out; but yes, abusing, or rather torturing your child under the disciplining and parenting flag is NOT OKAY. It is wrong, it is traumatizing, and it is a pure CRIME.

No, it does NOT go away

Contrary to what most people convince themselves, what happens during childhood doesn’t go away as the child grows up.

So many people still carry around traumas from their childhoods. They haven’t forgotten it, they haven’t let go, and they don’t “laugh” about it now.

A person who has been abused -at whatever age- carries out the pain of that trauma for the rest of his/her life. They struggle to have any kind of normal life due to the psychological and mental  problems they develop because of that trauma.

So what you so casually do to your child, your own flesh and blood, to get them to eat their food, do their homework, or stop jumping around the house, will eventually prevent him/her of being able to accomplish the simplest tasks in life, from forming a healthy relationship, up to and including raising his/her own children.

Because guess what, if you bring up an unbalanced person who thinks that torture is the right or only way to raise a child, he/she will grow up up to raise his/her children the same way. And thus continues the endless chain reaction to your heartless, brutal, irresponsible, and ignorant “parental” techniques.

What is the solution?

Here is what to do, short and sweet. If you are not responsible enough to raise a child in a healthy way, don’t bring one into the world.

Because surprise surprise, raising a human being is A BIG DEAL. It is a difficult task, and requires a lot more than conceiving a fetus.

So if you are not up to the task, there is this real life-saving invention called contraceptives, USE IT! And save yourself and the world, the guilt and struggle of bringing up a troubled person and making humanity any uglier than it already is.