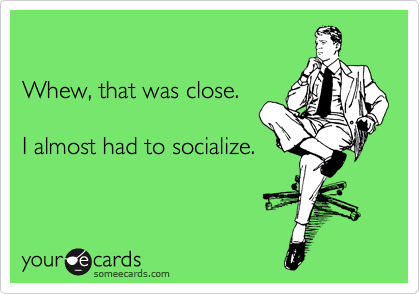 When it comes to personality types, we, ‘Egyptians’ tend to lack knowledge and that’s completely okay because ever since we were young, we were taught that being shy and enjoying solitude are characteristics we should get over, that sociable was the new normal. Who defined normal to begin with?

An extroverted introvert is someone who’s willing to go out and explore the world yet, wants to live in isolation and create a world that’s entirely their own. They find going out fun but it’s also so mentally draining for them that they need to recover for an entire decade by watching 10 seasons of ‘Friends’. We love people but we don’t always want to deal with them (It’s nothing personal, we often don’t want to deal with ourselves either). Sometimes, we’ll be so clingy that it’s literally going to make you go “ew, emotions”; other times it will seem like we’re living with new imaginary people inside our own heads.

Situations we go through that most people won’t understand:

Indecisiveness: “Let’s go out” “Yes! But, no. I really want to see you guys but I also want to read my book and take over the world but the world can wait but can I still come with you guys? Are you still there? ..Hello?”

We have no energy for small talk; we’re probably going to bore you with questions about your favourite colour, existentialism, politics, psychology and arts, animals, your mother and Pluto.
You don’t need to find it weird or random, but if we ask “How are you?” then we probably want to know how you’re REALLY doing, and if you ask us – we expect you would want to know too. If not, we will probably say “I’m okay” because we know you’re not interested, then you’ll probably think we’re NOT okay and keep asking us questions, and this is how a conversation about existentialism starts.

We might go out but we’ll still bring something that’s part of us; we’ll feel no shame dumping you for a book or another distraction. Yes. In a group outing.

You’ll often see us with a bag/backpack that could either have our whole entire life inside it or it might just be totally empty. (It makes us feel like home okay? DON’T JUDGE US!!)

We’ll go partying occasionally (and when we do, we’re probably embarrassing ourselves on the dance floor by doing the chicken dance) but, we’ll also prefer our beds sometimes.

We’re able to have fun on our own; we’ll take ourselves out, we’ll pamper us and we’ll love us and we HATE having to explain ourselves to our friends and family. (No, I don’t need you to go shopping or to go to the cinema.)

In class/meetings, we’ll mostly have that daydreamy look in our eyes but it doesn’t mean that we have anything to share. Don’t ask us; we’ll embarrass ourselves by saying something like “ah..hmm asli kont bafakar f taba2 el ma7shy el fel beit w en pluto ba2a kawkab tani”.

Sometimes, we won’t like the whole one-on-one hangouts, and it’s possible that when you ask us if we should hang out as a group, we’d still say no. I know you won’t get it (I don’t either) and that we contradict ourselves. It will hopefully all make sense sometime in the future.

– “mesh ha3raf akalemak toul el nahar. I have my own nonexistent life.”
You’re my best friend, but, we don’t need to text daily or call each other every few hours. You don’t need to know whether everything that’s going on is real or just visions inside of my head. It’s okay; you can still be my best friend.

– “La2 3adi asli sere7t” it just stands for I have new places to visit inside of my brain; it’s not that you’re boring (not always, at least) but I just can’t handle reality for too long.

– “Ana 3ayez akhrog” “Tayeb kalem 7ad men es7abak?” “La2. 3ayez. Akhrog. Lewa7di.”
La2 ya mama, I can enjoy being out alone. I need my own company; wallahi ana mesh pathetic ya mama la2 but I’d rather take myself out and pamper me.

– “Ta3ala nokhrog mane3melsh 7aga”
We can still ask you for your company, we’re using you – we don’t want to be alone. We can go out and do nothing and speak of nothing.

I understand that Egypt is the country that never sleeps, and that everyone around here is sociable, but bear in mind that we are a highly populated country and it’s hard to fit us all into one mold. We all have different ideologies, beliefs and concepts. I know Egyptians are known for being sociable and outgoing but that doesn’t mean that it’s a constant state of mind or a lifestyle. Don’t try to tailor people according to your own needs. People need space; they need to daydream. They need to distance themselves and be left alone sometimes. Give them the freedom to be themselves. I think on some level, we’re all extroverted introverts.