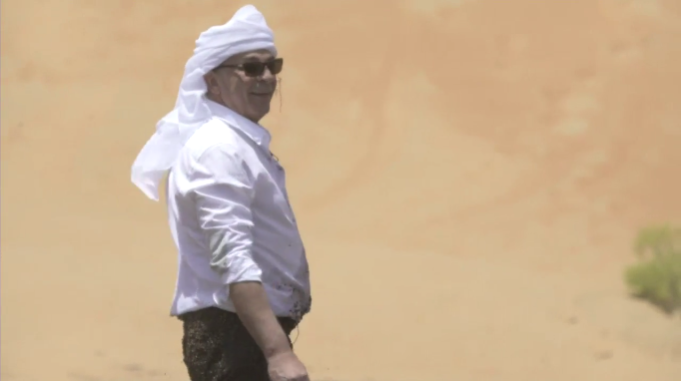 Yesterday, the popular Ramez Galal prank show hosted celebrity Mahmoud Hemeida. Ramez’s show this year invites celebrities to an interview then takes them on a car ride in the dessert where the car accidentally gets into fake quick sand and sinks with the passengers, creating a life threatening situation for the celebrity.
Yesterday, Mahmoud Hemeida got so furious about the whole situation that he took off his pants once he discovered Ramez was the one behind it and kept on repeating, ”This what you want us to do, huh?”, shocking the audience at the comfort of our own homes. Although MBC group removed the video online, here are the 3 reasons why it was still extremely unacceptable.

1.This doesn’t align with the actor’s image at all

Being the well renowned star that he is, it is not acceptable to appear in front of the audience in his underwear or speak in such a manner when we always thought of him as the descent actor whose talent goes beyond words. Seeing someone so respected and looked up act like that made us skeptical of our own perception.

2. Our kids are watching

We all grew up watching prank shows and enjoyed the comedic vibes. Imagine all the kids who suddenly find a celebrity taking their pants off and talking with such an attitude. A definite unacceptable way to respond to the situation!

3. Fire back at the show

We’ve always loved how it turned out funny when celebrities find out they’ve been pranked by Ramez. Hemeida’s response showed how annoyed he was by the whole concept, and how the fact that the guests get paid was the only reason this episode even aired.
That being said, the whole situation reflects what we shouldn’t be watching in Ramadan. We blame the show for accepting to air such a scene just to increase their viewership numbers. This has not only backlashed at the actor, but at the show and the network as well as.
Here’s the link (minute 19:15).