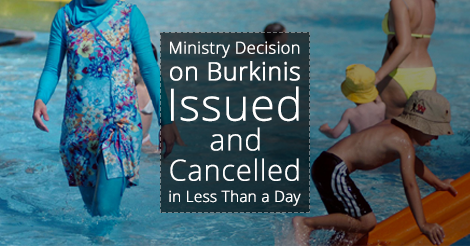 Burkinis, in case you’re not familiar with the term, is what we all know as the Mayyo Shar3y. Two days ago, the Ministry of Tourism issued a decision surprising all hotels that they must allow Burkinis on their resorts to avoid religious discrimination. It doesn’t end here, the decision was cancelled the following day!

Moving on, Ali Al-Halawany, Head of the Chamber of Red Sea Hotel Facilities, added that the decision was a mistake from the beginning and that hotels should have the space to decide according to their own circumstances and timelines not to mention the nationalities they host on their resorts! Representatives from the Ministry explained that the decision was not carefully studied before being issued and should have gone into further discussion!

The decision was hastily taken because the ministry was receiving multiple requests and being pressured by the media to allow veiled women to use the pool and swim in their Burkinis. The decision issued on Friday forced the hotels to allow it or even designate an exclusive pool for women in Burkinis!

In my opinion, to issue a decision and have it cancelled the following day raises a lot of questions regarding the credibility of operations inside the ministry and makes us doubt the power of media and citizenship that was beaten in this case by the power of hotels and foreign investments. More importantly, it raises another question; if all hotels decide to prevent these women from their right to use the resort pools, where should they go?!