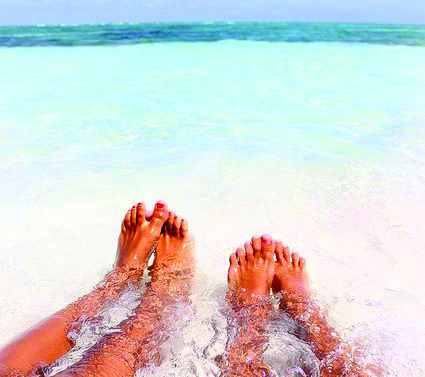 The sea is where we go to unwind and give ourselves a break from our hectic city lives. A lot of the time, we head to the beach in the hopes of getting a nice tan, while relaxing and having some fun in the sun with family and friends. But what we don’t realize is that there are a lot of health benefits associated with going to the beach. So before you slather on that over-priced tanning oil, take a look at why sea water is actually the only thing you’ll need at the beach for perfect skin and general well-being!

Sea water is rich in magnesium, which has been known to promote skin hydration and improve its appearance. The minerals in the water also contain anti-inflammatory properties, sure to relieve any skin redness. Combined with sea water, the sand itself can act as a natural exfoliant to dead skin. So if you want a perfect beach tan without all the dryness and redness caused by over-exposure to the sun, be sure to take regular dips in the sea and you’ll definitely notice the difference!

Sea water is rich in all kinds of essential elements, not just magnesium but potassium and iodine as well. When we  swim, our pores open up and absorb these beneficial elements while cleaning it from toxins. Another important characteristic of sea water is that it’s  full of negatively charged hydrogen ions. When you inhale sea mist, you’re actually boosting your immune system because of the anti-oxidant abilities of those ions.

Back and Joint Pain

When we’re floating in seawater, it almost feels as if we’re light as a feather. Because of the uplift of the water and its ability to make you float when you’re swimming, there is less friction between your joints. Lying with your back straight on the water could greatly relieve any back or joint pains.

In the past, seawater was believed to have numerous healing properties. In fact, there was an actual term for sea water treatment called ‘Thalassotherapy‘. The ability to heal and improve  general health is not only limited to the skin or immune system but  also extends to the relief of psychological and emotional stresses. A study, conducted in 2010, at Portsmouth University found that regular immersion in water could lower heart-rate and calm people down in general.

So before you find yourself afraid of getting sun-burned or wary of the beach and all the goodness it has to offer, remember that the sea is your own personal spa. It can relax, relieve and rejuvenate you without a huge payment receipt to follow. The combined treatment on your inner and outer body is enough to restore you to a younger self without having to hit rewind.