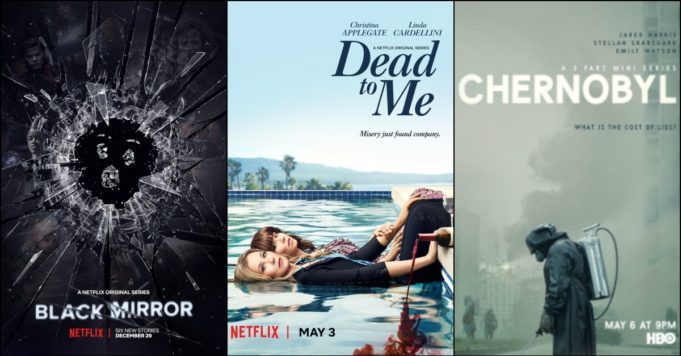 Eid is here and it is time for a big vacation. But not all of us like to spend their vacations painting the town red. Some of us wait for this opportunity so they can cozy up at home and relax.

Also, the streets tend to get extra crowded during Eid, which makes a lot of us (myself included) choose to stay at home.

But just because we are staying at home, it doesn’t mean we have to be miss out on any of the fun. On the contrary, sometimes a cozy vacation at home can be more fun than that at the beach.

But a necessary ingredient for the recipe is SEVERAL SHOWS TO BINGE watch. Yes, I said the magic word; binging.

But what to binge watch this Eid?

You know you have been planning to check it out at some point since basically EVERYONE has been talking about it EVERYWHERE you look.

Well, “some point” is HERE! Put this Eid vacation to good use and get to know why Chernobyl managed to be the talk of the town in less than a month from its release.

Hint: It is a brilliantly executed retrospective drama that tells the story of the Chernobyl nuclear disaster of April 1986, i.e. the worst man-made catastrophe in history.

Hold on to your hypothetical hats because your minds are about to be blown. Because -in case you didn’t know- Black Mirror is coming back on June 5th, i.e this Wednesday, i.e. the first day of Eid.

Black Mirror comes back each season with so few episodes, and with said few episodes manages to blow everyone’s mind and dominate the conversations everywhere. Odds are even that friend of yours that is spending Eid in Sahel will be streaming it on his/her phone.

Because let’s face it, none of us want to be excluded from the intriguing “Black Mirror” conversation in the break area when we are back at work.

The first season of Ramy has been released in April. But if you haven’t gotten around to watching it yet, now is your time to binge-watch all 10 episodes of it.

This Hulu Web series is the perfect show for all of us “Modern-day” Egyptians to watch. Because it reflects the struggles all immigrants, modern-day Muslims, and basically conflicted humans face.

It also happens to star the hilarious Egyptian American Comedian Ramy Youssef and one of the leading characters is played by our very own Amr Waked. It also features several of our favorite Egyptian stars.

Especially around the last couple of episodes which are shot IN EGYPT, you’ll be met with a delightful surprise appearance by a lot of familiar faces. Like Egypt’s favorite’s comedy duo Shady Alfons and Khaled Mansour, Reda Idris, Salwa Mohamed Ali, and the rising new star Rosaline Elbay (who you might know as Sarah from Kabeel).

Do we need to say more?

Remember how Christina Yang was the only reason we watched Grey’s Anatomy? Well, the brilliant actress behind her, Sandra Oh, is shining in a whole new and even more badass light.

All in her new hit show Killing Eve where she plays the role of Eve Polastri, a British intelligence officer hunting down a psychopathic assassin Villanelle portrayed by Jodie Comer.

The show broke records when its first season premiered in April 2018 despite being an eight-episode season. Its second season (obviously it was renewed) started airing in April 2019 and the two women are continuing to drop people’s jaws to the floors as we speak.

This is another two mind-blowing ladies taking us on a mesmerizing ride. The new Netflix show Dead to Me has got a little bit of EVERYTHING we love; grief, drama, suspense, comedy, and the very hard not to adore Christina Applegate.

Because who else could fit all of that in a short 10-episode miniseries! It was only just released on May 3rd, but it earned the binge-worthy stamp real quick, according to everyone who saw it.

So we can comfortably say: DO ADD IT TO YOUR EID BINGE-WATCHING LIST.

Well, that was our planned binging list, because as you can see, we take our binging VERY SERIOUSLY.

If you have got something we missed, help us make our list longer and give us some binge-worthy recommendations in the comments!

Thanks, and Happy Binging. Oops… we mean Happy Eid!