Identity Magazine
Home Entertainment The Gouna Film Festival: Behind the Scenes of All the Glam
Facebook
Twitter
Google+ 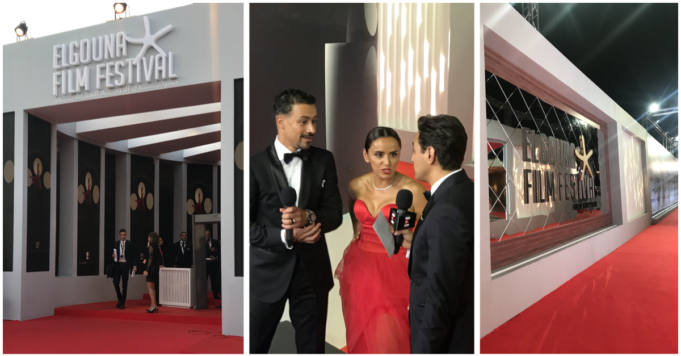 As members of the press, we were among those invited to cover the 3rd edition of the prestigious Gonna Film Festival (GFF) from the 21st of September to the 27th. And if you have been following our social media platforms, then you’ve definitely seen all the glam.

Which is why we thought “why not give our readers an insight on what it was all like behind the scenes?” And that’s exactly what we’re doing right now.

Thinking back, it was one hell of a day. Fun and glamorous, but SO tiring. Mainly because of the amount of celebrities that have made an appearance.

So, in order to able to take everyone’s pictures and try to immediately post the content online, we had to run around and simultaneously work with multiple devices – Camera, Phone, Laptop, Mic..etc -.

That’s of course in addition to having to pay attention to who exactly came, who didn’t and what they were wearing.

To say the least, it was nerve-wracking.

The press – including TV channels, websites, international press, traditional media, lifestyle magazines and more – all remained in their designated area. Right in front of the place where celebrities pose for red carpet pictures.

We can’t say it was a tiny space, but for the amount of individuals with their cameras, tripods, and mics to other equipment; it was kind of an average sized area.

So, it’s safe to say we were – somewhat – on top of each other. And sometimes, you’d be surprised to see how photographers, anchors and journalists are pushing each other to get better content from a better angle.

That being said, we were in awe at how everyone helped one another. Although the field is quite competitive, it wasn’t an “every man for himself” kind of thing.

On the contrary, when it got too crowded and there was no space for everyone, we found photographers from other publications offering their own pictures to people who couldn’t get nice shots. Which was pretty cool.

Other than those who’d push you for a spot, there were quite a few who would actually save you a spot if you’re late.

Red Carpets and the Crew

We stayed for nine days, and let us tell you we haven’t even felt the sandy beach. Why? Well, on average, we’d have two red carpets a day.

And by red carpets, we mean the place where we capture pictures of celebrities who come to the movie screenings and other important events. That usually took place in “The Marina Theatre“.

There’s a specific time when you should pass the press gate to take your position and start getting ready to shoot when celebrities enter, however, sometimes we’d find ourselves waiting outside for half an hour over the set time – especially in the opening and closing –.

But there were other times when we’d all easily get in. Especially if we come earlier, and that’s when we see the whole area empty. It’s like the calm before the storm.

Other than all the pushing and running around, we have to tell you about the crew behind keeping the red carpet neat and organized.

There was a young man with a list of all the celebrities’ faces and names, in order to announce their arrival on the red carpet.

Another man positioned the celebrities on the red carpet and made sure they only take a few seconds, so the others could get in and have their moment.

A woman, positioned right in front of the press area, was responsible for taking celebrities to do their side interviews. The best thing about her is that she was friendly, and gave us all the information we need.

And by information, we mean that sometimes we don’t know the name of a specific actor/actress on the red carpet because they’re part of the movies that were newly shown and released in the festival.

So the carpet crew made sure we know everything and everyone’s names. It was a team effort between the press – within themselves as well -, and the red carpet crew.

We know we talked a lot about the red carpet already, but we basically spent over half of our time there. So, excuse us.

While conducting his celebrity interviews in the opening, TV presenter Sherif Nour El-Din made sure he stood in an angle where his interviewees are facing the press so we could get good photos.

Especially since we were standing so close to the TV interview area. So, even Sherif Nour El-Din was working in a team with us.

Actually, so did Boussy Shalaby!

To end our adventures on the red carpet, we thought that w had to tell you about the cat who invaded the red carpet like it’s a runway. That’s when all of us started taking pictures and videos of her as one of the GFF team escorted her out.

They were a big part of the festival itself, of course. Multiple media days were held during the nine days, especially for the festival movies’ casts.

So, we were basically in between red carpets, events, and interviews. Or actually, in between ‘waiting‘ for interviews. Because, unfortunately, we had to wait for a few people who were late.

Which didn’t give us much time until the red carpets after. And that actually was part of the reason why we didn’t get to see the movies shown there. In addition to the CineGouna workshops in TU Berlin.

Another marvelous thing about the behind the scenes we got to witness at GFF; was walking in the mini streets of El-Gouna or sitting at a cafe having breakfast in the morning, and seeing the likes of Sherine Reda, Dora, Arwa Gouda, Tara Emad and more shooting their parts for the closing song “Sa2fa“.

Also, there’s a place called “7th Star” and another called “Blue Blue“; those were the two places were basically everyone chilled in the early mornings or late nights – before the afterparties, of course-.

We’d usually be having our breakfast/dinner there; and see everyone from journalists to founders and celebrities having a mini break until the cameras and lights go off again.

Overall, the behind the scenes of all the glam that is the Gouna Film Festival were both tiring and so much fun. We hope you enjoyed reading what you didn’t see on TV and social media!