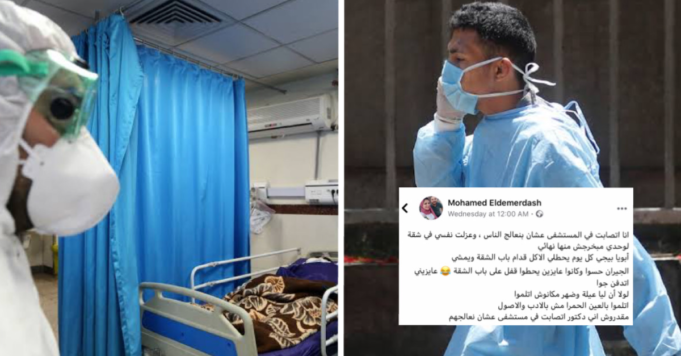 While people around the world are gratefully bowing to local doctors and health workers for fighting the novel Coronavirus, unfortunately some people in Egypt are choosing to do the exact opposite.

Ever since COVID-19 cases began spreading in Egypt, our front -liners, Egyptian doctors have been doing their best and risking their lives every day – trying to fight back and treat as many patients as possible.

Despite their amazing efforts and instead of being appreciated, some of those doctors end up having to face terrible treatment from their own neighbors back at home.

Especially since some go as far as refusing their presence in the same building because the doctors are considered “carries of the virus” and could spread it to them one way or another.

We understand that a lot of people do this out of fear, but we can’t fathom how it easily escapes those bullies‘ minds that those doctors risk their lives as well as their own families’ on a daily basis for the wellbeing of others!

A couple of days ago, Dr. Mohamed El-Demerdash spoke out about his awful experience with his neighbors who, as soon they heard he had tested positive for the virus, wanted to lock him in and basically let him die alone inside.

Unfortunately, this isn’t the first time for us to hear about such maltreatment of health workers in Egypt. In some other cases, Coronavirus patients choose not to inform doctors of their infections in fears of them refusing to treat their other serious illnesses. Which, as far as we know, has never happened!

It’s absolutely despicable how, as time progresses, human beings are losing empathy amid these rough circumstances, instead of sticking together to get through it.

We need to understand that doctors don’t work for us. If they’re obliged to fulfill their oath and duties as health workers and risk their whole existence in the name of bravery and honor, it doesn’t mean that they’re obliged to accept the horrific bullying, not even for one second.

It honestly doesn’t take much to be kind and empathetic, especially towards those who save our lives. It’s what makes us human…