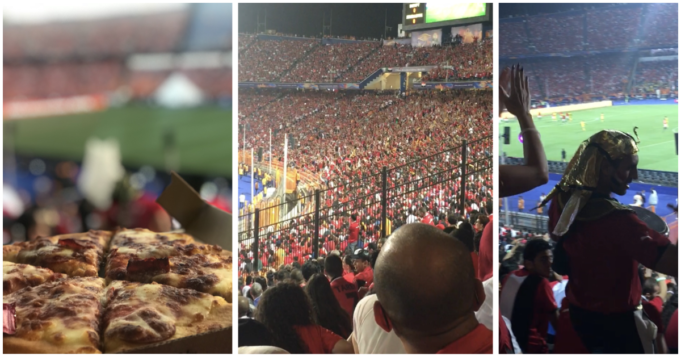 Besides the fact that the opening ceremony for the 2019 African Cup of Nations (AFCON 2019) was breathtaking, many things that took place on the ground did not show on TV!

And only the fans who were present at Cairo International Stadium on June 21st for the opening ceremony (Egypt vs Zimbabwe) will understand! Here they are:

When the sun set, as everyone on the pitch was preparing for the ceremony itself, they played songs for people to sing and dance to as they cheered on for the National Team; even three hours before the game! And one of those songs was REALLY cheerful that EVERYBODY was dancing and singing every time it came on.

But unfortunately, we don’t know what the name of the song was!

Around an hour before the game, a team from TIGER with drums invaded the fans’ space in the stands to make them cheer loudly for Egypt and the National Team.

Literally, everybody loved them!

#3 The Pharaoh with the Tabla

There were too many fans dressed up as pharaohs, but there was one specific guy who was also holding a ‘Tabla‘ and kept going to every row in the stands to make people sing and dance with him!

#4 The Failed Waves and the Successful Ones

The stadium was full house by 5:30 PM. From that time until the end of the game at 12:00 AM, people were creating a new wave every 15 minutes. At the beginning, because it was too hot and not everyone was focused, it failed.

However as the time passed and the adrenaline reached its maximum, the fans created the best wave ever in Cairo International Stadium, with their phones lighting up the atmosphere!

At half time, the screens in the stadium pulled up a picture of a woman named Rasha. And the speaker announced that she just won the Best Fan Prize from Orange Egypt.

The thing here is, everyone was confused at this moment because when the stadium speaker announced her, she didn’t say what the prize was nor how she won it. So everyone was just there looking at each other trying to understand what that whole thing was and what the prize could be. The curiosity was actually funny!

During the first half, while everyone was following the boys playing on the pitch, suddenly a group of people in the CAT 2 stands began to shout “Let him go” for like a solid minute .

And because security were everywhere, it was so hard for everyone to understand what’s going on or who got in a fight with whom. It remains a mystery everyone wants to solve till now!

Because there was a food court in the stadium that sold KFC, Hardees, Pizza-Hut, Costa and more, people were standing in long lines to get their tummies full for the already long day! 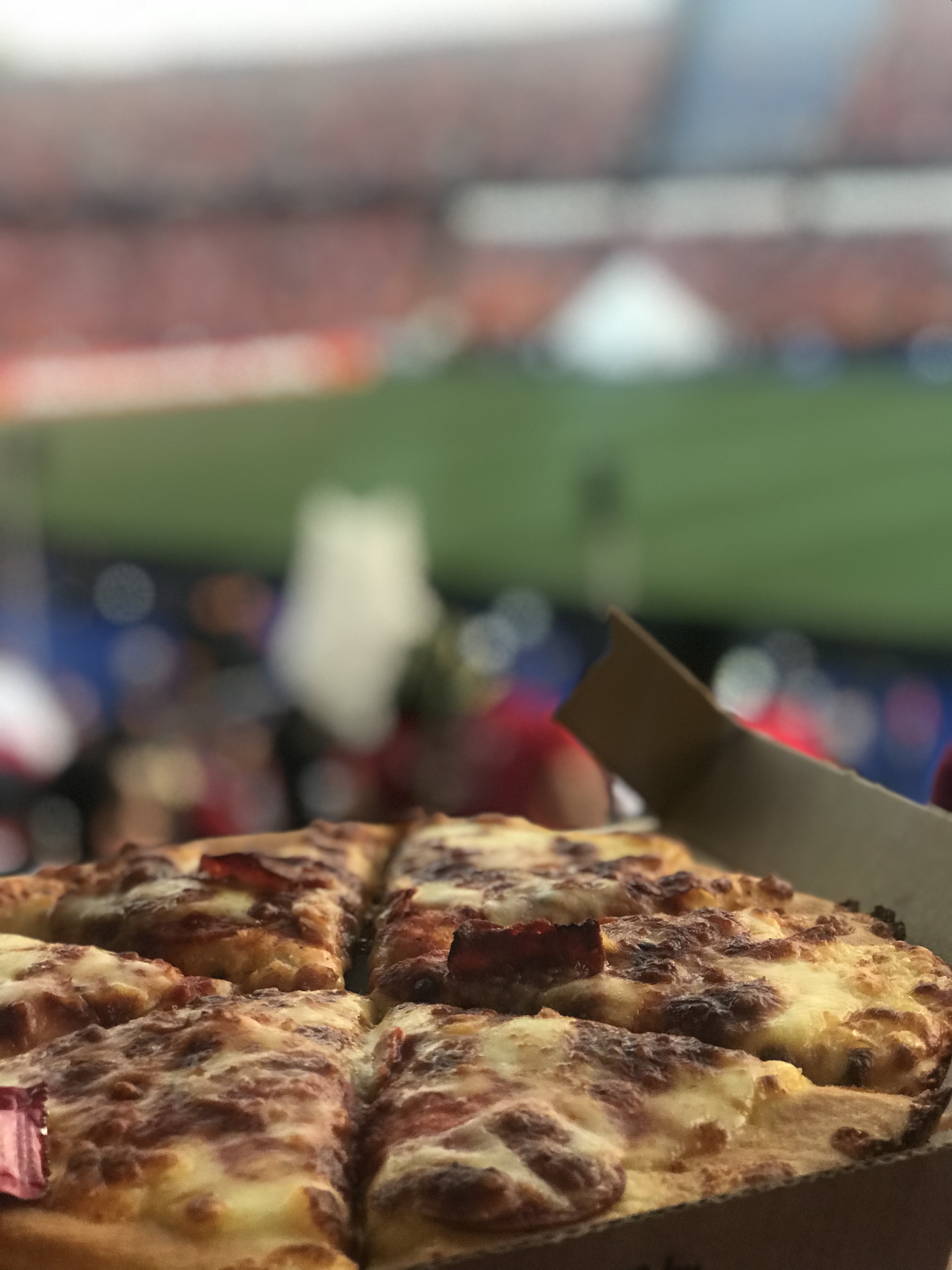 But for some reason – or an obvious one, to be honest -, everyone seemed to be preferring pizza over the rest. Therefore, the stadium stands were basically filled with big Pizza Hut boxes, everywhere!

That one was so cool! Right?
Pepsi and Chipsy were giving away a big cup with a straw and a wide plate to drink Pepsi and eat Chipsy, all at once! 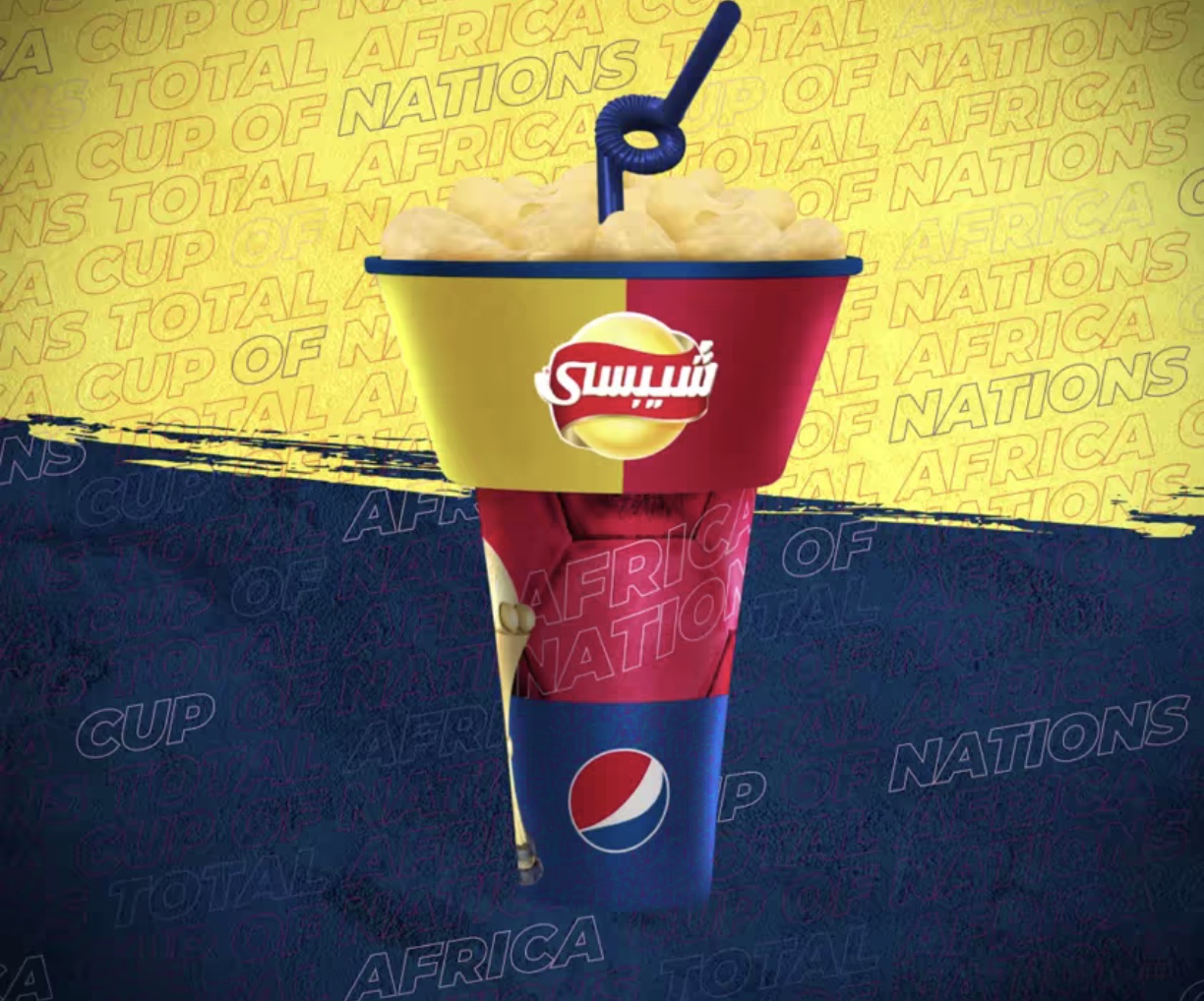 And everyone was pretty impressed!

Let us know; were YOU there? And did you catch on any of these moments?!