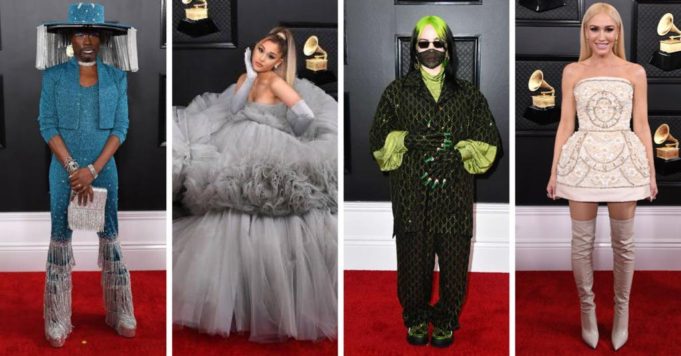 So, the Grammy’s 2020 took place last night and we are here to talk FASHION. If we know one thing about the Grammy’s, it’s that stars use it to go a little wild and quirky with their fashion style. But how much quirky is too quirky?

To be fair, last night’s red carpet did deliver some really glamorous old Hollywood looks. But mostly, it was weird looks for the win. Let’s take a look!

The millennial pop sensation wore a grey-sh puffy dress that was giving out a princess-y vibe. The dress was so big, she had to pause and sit down right in the middle of the red carpet. Like, literally!

Billie, who was the awards-collector of the night, is best known for her weird fashion style. But this time, it was just beyond explaining. Hey Billie, your grandma called, she wants her outfit back!

Chrissy Teigen is another celebrity that fell on the weird side of red-carpet looks. She wore a three dimensional orange dress that was a tad too much with her already overly tanned skin!

Ladies and gentlemen, Billy hits once again. Who wants to wear a tuxedo when you can wear a blue pantsuit with a crop-jacket and a sparkly hat? Honestly, we are out of words.

Tyler the Creator- The Bellhop

He is a creator, indeed. The rapper chose a pink bubblegum suit with a matching case and hat. The award-winning performer channeled his inner bellhop for no apparent reason, as far as we know.

We love Gwen Stephani, even when she goes a little extra. For the 2020 Grammy’s the pop singer walked the red carpet in a white Dolce & Gabanna dress that, we think, looked like a wedding cake. What did you guys make of this dress?

The young rapper rocked a carefree cowboy suit made by Versaci. The color was none other than fifty shades of pink bedazzled with golden studs. We’ll stick to congratulating the star on his Grammy wins though!

The former Fifth Harmony member went for a Gothic look in last night’s Grammy. Apparently, she got bored with all her princess like gowns and wanted something different this time.

FKA Twigs delivers bold music and apparently, bold fashion too. The award-nominee wore an avant-garde hooded pink and black gown. But we think she might have gone too far this time, do you agree?