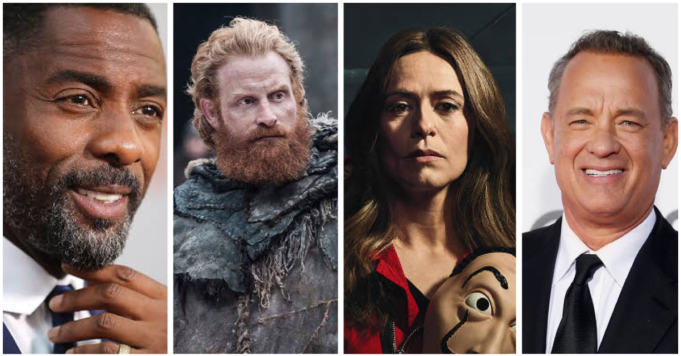 The Coronavirus global pandemic has now reached almost every single part of the world. A total of 200,000 people have now tested positive for COVID-19 around the globe. Some have thankfully recovered, some are still bravely battling, and some have unfortunately lost their lives.

In an attempt to continue raising awareness about the virus; we made you a list of stars, celebrities and athletes who have been infected by the novel virus.

And while battling it, they all went public with the terrible news in order to raise awareness, urge people to stay safe, and warn them about how serious the situation is and how it could easily happen to anybody.

A week ago, the actor announced that he caught the virus while shooting a movie in Australia. And just yesterday we heard the good news that he was released from hospital to self-quarantine for the next weeks, now that he is out of the danger zone.

Wilson is an American actress and singer – who also happens to be Hanks’ wife. The star tested positive for Coronavirus under the same circumstances as her husband and is now also continuing her treatment at home, almost a week after being admitted to hospital.

On Monday, English actor Idris Elba posted a video announcing the awful news of his Coronavirus test results. Although the actor had confirmed that he hasn’t shown any symptoms; he was tested after discovering that he recently came in close contact with someone who just tested positive as well.

Elba took the time to raise awareness and urge people to stay safe at home and not freak out about everything that’s going on.

The Spanish actress, who plays ‘Inspector Raquel Murillo’ in the fan-favorite Netflix series “La Casa De Papel” or “Money Heist“, has announced through an Instagram post that she tested positive for Coronavirus and that she will be self-quarantining and receiving treatment over the next couple of weeks.

Ituno also used this time to warn her followers about the seriousness of the situation, especially for those with medical conditions and weak immune systems. And she urged everyone to take care and stay at home in order to save lives.

A couple of days ago, Game of Thrones star who played Tormund Giantsbane has announced his sickness through Instagram. Hivju mentioned that he has the common mild symptoms of a cold, but that there are so many people out there who are at a high risk of severe conditions.

In his lengthy post, the Norwegian actor urged people to be ‘extremely careful’ and protect themselves as well as those around them, since we’re all fighting this together.

Three days ago, the French-Ukrainian actress and model – who’s most known for her role as ‘Camille’ in Daniel Craig’s 2008 James Bond movie “Quantum of Solace“- has also announced her positive results for Coronavirus through her Instagram account.

Kurylenko mentioned that she’s been ill for a week already and that she’d had symptoms of high fever and fatigue. However, only a day later – she took to Instagram again to say that she’s getting much better and shared with everyone a much-needed list of vitamins to take in order to boost their immune system!

American actress – best known for her roles as ‘Danielle Bouseman’ in both parts of the movie “Happy Death Day” and her role as ‘Honeymaren’ in “Frozen II” has announced the news through her Instagram stories, saying she’s been in quarantine for a week.

Matthews took the raising awareness-bar to the next level as she posted some now-highlighted stories about her day-to-day Coronavirus diaries; explaining the symptoms she’s been experiencing, the medications she’s been taking – the good and the bad – and how everything is progressing.

The actress also advised everyone to stay safe and self-quarantine!

The NBA Brooklyn Nets player along with three other teammates have all tested positive for Coronavirus, a couple of days ago. Durant is currently being treated in hospital. And as a result, the rest of the Nets are self-quarantining as well, so are the Lakers who faced the Nets last.

Just a day or two before the Premier League announced the suspension of the season until April 4, the English footballer who plays for Chelsea FC announced his infection through Instagram stories. Which resulted in all his teammates being tested and self-quarantining afterward.

But thankfully, in a recent video, he confirmed that he’s making progress and feeling well! It’s worth mentioning that the 19-year-old is the first Premier League player to come down with the virus.

Arsenal FC announced that their Spanish head coach tested positive for Coronavirus only a couple of days before the news of Hudson-Odoi. That was also only hours before they took the decision to temporarily suspend the league.

However, it wasn’t long until Arteta posted on his Instagram to let everyone know he’s doing better and most importantly, advise everyone to follow the guidelines and stay healthy!

Twenty three year old Mitchel is one of seven NBA players who got infected with the virus. The American Utah Jazz player also took to Instagram to thank everyone for the well wishes and advise them to educate themselves on the situation and be there for each other.

Only days after joking about the global pandemic and touching journalists’ mics at a press conference, 27-year-old French basketball player has tested positive for Coronavirus.

The NBA player published an apology post – urging people to learn from his mistakes and take what’s happening to the world seriously in order to protect everyone and stop the virus from spreading.

The 22-year-old Juventus midfielder has announced the news on his Instagram following testing positive for the virus, which led all the Juve players – including Cristiano Ronaldo – to be quarantined for two weeks. Rugani also advised everyone to be careful and respect the rules.

With the whole country now on lockdown, Serie A (The Italian Football League) is suspended until April 3.

Almost a week ago, the three Valencia FC players were the first from La Liga to contract the virus. They are now doing well and have all posted lengthy messages to urge people to follow the medical instructions and to stay safe at home until this passes.

We wish these stars a speedy recovery. And we certainly hope you guys are self-isolating, washing your hands and most importantly, staying safe! Don’t forget, we’re all in this together.