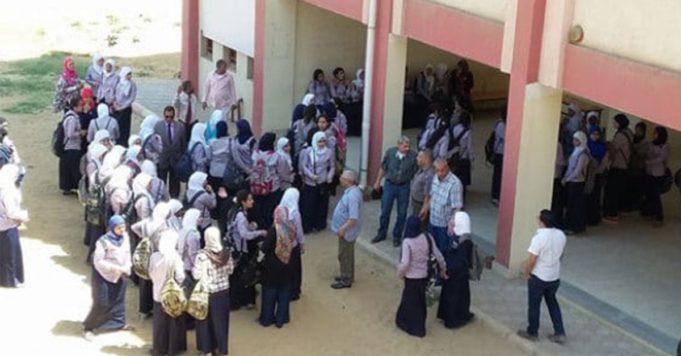 After the recent horrifying sexual harassment incident in Suez, another Egyptian school in Beheira has witnessed yet another jaw-dropping harassment case.

In even more shocking news, the Administrative Prosecution Authority in Egypt refers one of the teachers in a technical secondary school in Shubra Khit, Beheira to an urgent trial for sexually assaulting and raping several of his students.

This was based on an official report the Administrative Prosecution Authority received from the Education Directorate in Beheira. This report was about the memo the principal of one of the secondary schools in Shubra Khit filed against one of his teachers accusing him of performing forceful sexual acts on several of his female freshmen students.

The Prosecution Authority proceeded with their investigations in the case which, in fact, proved that the accused is guilty of sexually assaulting several of his students.

The investigations revealed the different horrifying approaches this sexual predator took against his victims. Including touching their bodies without consent, verbally assaulting them by talking to them in an appropriate manner and describing their bodies in sexual and violating ways, and even asking the girls if they watch pornography on their phones!

This man’s appalling acts went as far as trapping one of the girls in the men’s bathroom. He also trapped another student in the school’s art room and locked the door from inside, but luckily the girl kept screaming till her schoolmates heard her and he was forced to let her out! It was also revealed that he broke one of the girls’ phone when she tried to resist him.

Apparently, this heartless unethical teacher has been getting away with his vicious acts by abusing his authority over the students and threatening to fail them if they do not give in to his vile demands.

Of course, after all that has been reported and proven in the investigation process, the  Prosecution Authority referred this heartless criminal for an urgent trial. Hopefully, he will be punished for his disgraceful acts and violating abuse of power.

Sexual harassment is an issue many women and men fear from and struggle with. But to see such a horrifying case in a school none the less means that this issue is getting even bigger than we thought!

It means that the very person who is trusted with your child could be abusing and assaulting them! Children don’t know how to stand up for themselves; it is our job to protect them. You can learn how from here.