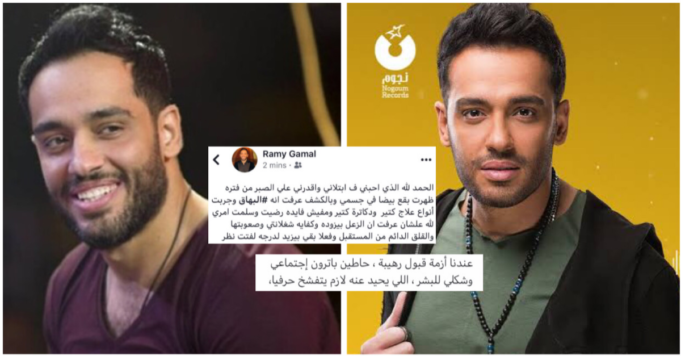 On Sunday, November 11, Egyptian singer and musician Ramy Gamal announced through his Twitter account that he had recently been diagnosed with the Vitiligo disease.

Vitiligo (Skin fading), that translates to “Bohaq” in Arabic, is disease in which the pigment cells of the skin are destroyed in certain areas often leading to the loss of skin color in the form of depigmented, or white, patches of skin in any location on the body.

Vitiligo could be a genetic disease. But unfortunately, there’s no known way to prevent it. And according to Medicine Net, it can develop at any age.

While we’re sad for the young singer and wish him well, we can’t help but sympathize and agree with the painful words he’s written as he made his announcement.

Gamal did not only want to let people in on what he’s going through, he also wanted to raise awareness on the topic and tell a very important story that unfortunately broke our hearts.

Turns out that the singer was on the verge of retiring and apparently still is – because of the ‘strange’ looks he often gets as his condition increases.

Not only that, Gamal also admitted that some people advised him to find another job because they thought the audience won’t accept him the way he is.

Which got him thinking the same way, especially after continuing to receive some very inconsiderate and insensitive comments like: “Is this disease contagious?“; that’s in addition to those who would be too scared to even say hi because of the patches.

It’s just extremely appalling how we’re in 2019, and people are still keen on being a bunch of bullies. And the worst thing is that those people often think that their “little” remarks or “surprised” looks are harmless. Which is, obviously, far from the truth!

We’re naturally surrounded by so many people who suffer different types of illnesses, disabilities and diseases and are strong enough to face them.

However, we can’t even begin to imagine how it feels like when some of them are being stared at or questioned about their condition on a daily basis and not being treated like normal individuals.

And we’re taking this as a chance to tell people who – due to lack of awareness – let others down, even unconsciously or with no bad intentions; that in the end, those looks, those stares, those inconsiderate comments and insensitive questions do hurt and never go unnoticed.

In Gamal’s case, after trying so hard to cover up his Vitiligo so he doesn’t get bullied, he almost quit what he loves most to avoid facing the unjustified humiliating situations.

So if your excuse is that you don’t know how to deal with it, then train yourself and learn to accept others. And by accepting others, we mean, learn not to look differently at those who are simply not you. Because surprise, we ARE different!