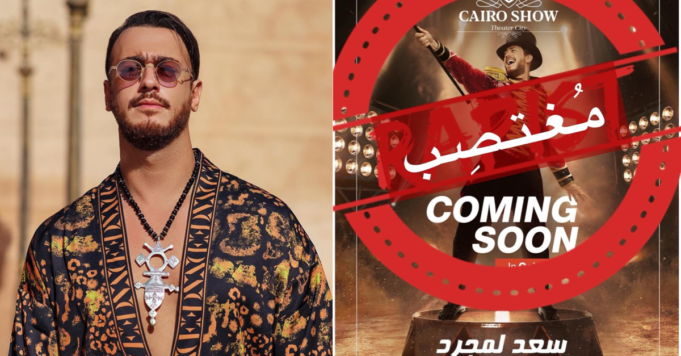 In 2019, Moroccan singer Saad Lamjarred was a travel banned criminal awaiting trial, yet, people managed somehow to give him space to collaborate in “Ensay” with Mohamed Ramadan.

Back then, and despite the #MeToo movement, discussions about sexual harassment and rape weren’t as heated as the current moment. Nonetheless, many kept screaming (in vain) at the top of their lungs as to why this is shameful.

So, waking up one day to hear about how an Egyptian entertainment platform is set to host the guy now, in 2020, amidst all the ongoing sexual harassment cases and campaigns and the whole social awakening, proves that…

when you give a criminal an inch he takes a mile.

Apparently, a social media campaign announcing a new theatrical performance starring Lamjarred in Egypt’s “Cairo Show” theatre was launched two days ago. The thing that stirred a lot of angry reactions and the hashtag #مش_عايزين_لمجرد_فى_مصر‬⁩

But why in the world would the runners of Cairo Show think it’s a good idea to invite over a guy whose reputation is so questionable in the first place? He’s accused in more than three harassment cases in different countries .

What’s even sadder and more shocking is the fact that some Egyptian fans of Saad made a counter hashtag supporting the visit. Ignorantly unaware of the message they’re sending out about Egypt, women and values.

Are we telling women we don’t care about their safety? We’re giving a sexual predator the chance to take his crimes to Cairo as well?

Backing this with the legal saying “innocent until proven guilty” as if being arrested on several fishy incidents and fleeing countries to avoid more jail time isn’t enough of a verdict to his reputation.

HOWEVER, this cloud has a silver lining. Social media awareness successfully managed to pressure the hosting platform into deleting all the posts related to Saad and his event.

After they pretty much spammed the organizer’s platforms on social media with the mentioned hashtags. Also, multiple celebrities like Rosaline Elbay and Asmaa Galal joined in for the cause and decided not to be passive about it. Now that’s a victory, huh?

Up until this very moment, folks at Cairo Show remain silent and didn’t even respond to the whole situation. Which we think will harm their case even more. How about an apology and we could all move on? Wake up and smell the fire!

Update: Tickets Marche removed the related post as well. So this probably means the show is canceled. As for Cairo Show, they remain silent.

Honestly, this whole thing couldn’t be more pathetic and tone-deaf to the cultural moment in Egypt. People need to wake up and realize that normalizing criminals and harassers won’t be tolerated and that it’s way more than a trend.