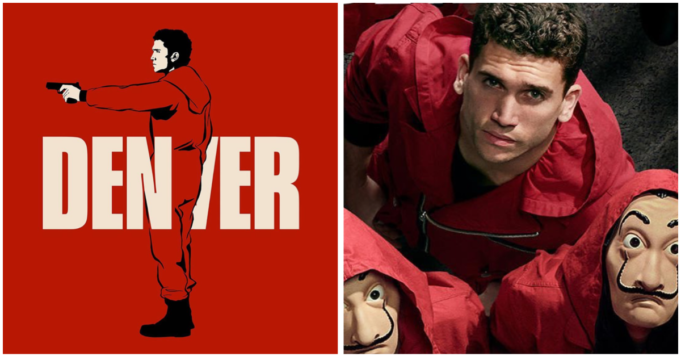 We had the opportunity to exclusively chat with Jaime Lorente, the talented Spanish actor who plays the one and only Denver in the series. He talked to us about his character’s vulnerabilities, special traits, the famous improvised laugh, Denver’s one of a kind relationship with Monica and a lot more.

1- Denver’s character is very significant on the show and it’s also a major fan-favorite. What do you think is the best thing about him? And is there anything you dislike about the character?

I really like how Denver feels love in a completely honest way. He’s a very honest man when it comes to love and feelings. While the thing I could say I dislike about him is how he handles himself. Because he’s usually full of so much rage.

2- How do you feel about the fourth season and what can you say about what will happen with Denver and his bandmates?

Season four is all about exploring the internal emotional situation for all the characters in regards to everything they have gone and are still going through. As for Denver, saving his relationship [with Monica] takes a big chunk of his thoughts throughout this specific season. Especially whether or not the relationship is going to survive whatever this crucial heist brings this time.

3- You definitely know how fans tend to always talk about Denver’s iconic laugh on the show; it’s a very crucial part of the character. How did you develop it, and was incorporating it into Denver’s character your idea from the beginning?

The laugh actually came up on the casting for the show. From the very beginning, they wanted Denver to have a unique and significant laugh. And what happened is that I kept trying different ones, I found this one and we settled on it. And that was probably the main reason I was selected for this role.

4- Did you expect “La Casa De Papel” to have this huge impact all over the world? And how do you feel about the fans’ attachment and dedication to the series and all its characters?

I guess no one actually saw this coming and until now, we’re still in disbelief that “La Casa De Papel” made this huge impact all around the world.

After the show was put on Netflix, we started to notice the number of followers and comments we received on social media and that’s when we started to understand the magnitude of the impact the show has had and how it reached so many places.

That being said, we always try to handle it in the most humble and normal way.

5- Denver had gone through a lot of rough moments during the past three seasons; which scene do you think was the toughest for the character and the hardest for you to shoot?

The most difficult scene for me has to be the one where Moscow, Denver’s father dies in Season two. Because it was an emotional scene. It was very painful and it required a lot of mental preparation because of how tough the situation was.

6- Do you have a favorite season from the show? What is it and why?

Yes. For me, the first and second seasons will always be my favorite. Because we had the opportunity to go on trips and travel to many places and countries then. And at that time, it was the start of the big recognition the show was getting.

7- How do you think Denver and Monica’s relationship affected Denver’s own personality? Because when we were first introduced to Denver at the beginning of Season one, he wasn’t the same person he is with Monica now.

Monica definitely had a big impact on Denver’s character because the relationship they have is very different. Monica is his partner, but she also acts like his mom. She taught him how to be more respectful. So she surely made him a better man.

We had so much fun interviewing the super talented actor. Stay tuned for the rest of our exclusive interviews with the amazing cast of Netflix’s “La Casa De Papel“.

And don’t forget to let us know in the comments if you enjoyed Season 4 and if you have any questions for the stars of the show!