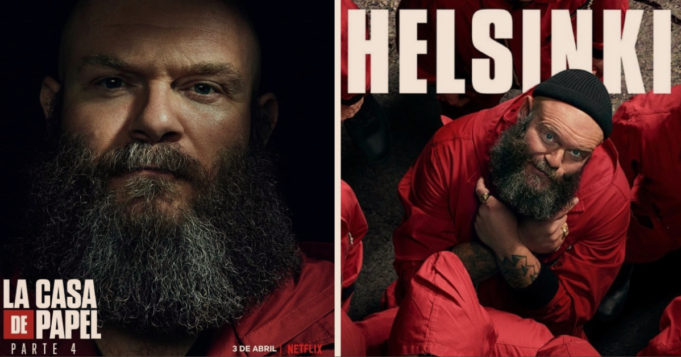 In continuation of our exclusive series of interviews with the cast of the critically acclaimed and globally-praised Spanish show, we spoke to Serbian actor Darko Peric who plays Helsinki as he made some very spot-on points about his character on the show, talked about the fourth season and more!

1- Helsinki’s character goes through so many ups and downs as the events of the show progress; how do you see his personality and what can you say are his best and worst traits?

I think Helsinki’s character is full of empathy – which is a great trait. However, you can clearly notice how he usually does things because he’s simply told to. He doesn’t put much thought into it, and he rarely ever takes matters into his own hands. Maybe that’s what I could say I dislike about him.

2- We’re pretty sure you already know how huge “La Casa De Papel” ‘s fanbase is and how it just keeps on growing. Do you ever go online and see the audience’s comments and reactions to the episodes? And how do you feel about the success of the series?

I’m definitely aware of the love the show is getting around the world and on the internet, of course. Especially with the number of followers we keep gaining on Instagram as a result, for example.

I’m also really glad there are a lot of people who love the show, and I’m even more content because at least my character isn’t getting any hate online.

3- So far, which season has been your favorite on the show? And which scene can you say has been the hardest to shoot?

For me, apart from the latest season, the third one is definitely my favorite. It’s the most complete, in comparison to the first and second ones. As for the hardest scene to shoot, it has to be when Oslo died in the second season. Mainly because Helsinki had to kill him, in the end, [out of mercy].

4- What are you most excited for people to see in the fourth season of “La Casa De Papel“?

I can’t say much, I don’t want to spoil anything. But believe me, fans are not going to expect what’s going to happen. They have no idea what’s coming their way.

5- The whole cast of “La Casa De Papel” seems to have great chemistry and it really shows on screen. Out of all of your co-stars, can you name a favorite? Who’s the one you usually have the most fun with on set?

I have fun on set with all of them. However, in the first two seasons, it was mainly Pedro Alonso [Berlin]. But as you know in the third season, we didn’t shoot together since he only appeared in the flashbacks.

As for the later seasons, three and four alike; it’s got to be Rodrigo De La Serna [Palermo]. We had so much fun shooting together!

It was a pleasure interviewing and chatting with Darko, who – especially after Season 4 – has become everybody’s favorite “Helsi”.

Stay tuned for the rest of our exclusive interviews with the amazing cast of Netflix’s “La Casa De Papel“. And don’t forget to let us know in the comments if you enjoyed Season 4 and if you have any questions for the stars of the show!