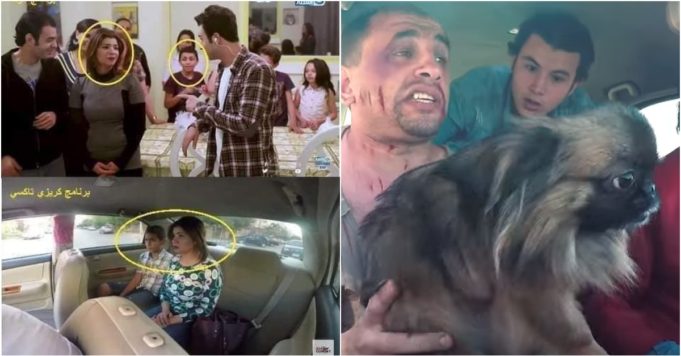 If you still needed more proof that prank shows in Egypt have hit below rock bottom, here is another one.

The new prank show Crazy Taxi which airs on YouTube has actually been gaining people’s praise ever since it started airing.

Despite its low budget and the fact that it doesn’t actually air on TV, it still managed to earn quite the followers and fan base.

People called it creative, hilarious, refreshing and original. And one would agree, if only it were true.

For those who don’t know, the idea of Crazy Taxi is that the taxi driver who is the star of the show Ibrahim El Saman, takes passengers in his car and puts them through very awkward or annoying situations during their ride. And after he gets them angry and worked up, he reveals that it’s a prank and they all laugh it off together.

So the entire idea of the show is based on “the assumption” that the passengers have no idea they’re being filmed, or otherwise it won’t be a prank.

However, recently, some photos have been revealed on Facebook of some of those passengers in TV series, movies, TV commercials, and other prank shows.

This, of course, proves that they are not randomly picked strangers, they are, in fact, paid actors who agreeably appeared in Crazy Taxi and pretend to be pranked.

Of course, we can’t really be that surprised seeing how there always have been speculations over prank shows and their credibility.

But still, the blow wasn’t completely softened, because this show, in particular, has gotten a lot of people excited about it thinking that this one is different than all the others.

And now all the pranks and situations that used to crack people up have been revealed as just another staged comedy.

Which we might have been able to look past if only it was the only thing severely wrong with that show, but sadly, it is not.

In one of their staged “pranks”, the actors of the show used a puppy as a ‘prop’ to freak out one of the passengers.

In their ‘sketch’, they literally threw the dog back and forth at the passenger like a rubber ball, completely disregarding the horror look on the innocent animal’s face and the fact that this is you know… animal abuse.

Sadly, this wasn’t that big of a surprise, because we have all gotten used to prank shows being completely oblivious to people’s feelings, let alone animals. If racism, sexism, and bullying are what passes for a joke nowadays, why wouldn’t animal abuse crack people up?

All for the higher purpose of “pranking”, right?

Here’s the thing; we all like to laugh, and no one has anything against prank shows itself, I mean it is not like talk shows now are that much better anyway.

So if you want to make prank shows, by all means, go right ahead.

But before you start working, take a quick look over the basic ground rules of human (of all races and genders) and animal rights, and a look at the old ‘creative and intellectual property’ book. THEN go right ahead.