Identity Magazine
Home Trending Here is a Living Proof That The Love Is Strong Between Egyptians...
Facebook
Twitter
Google+ 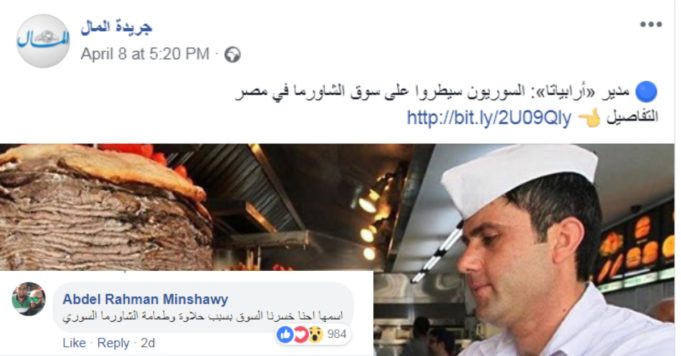 A simple Facebook post showed how much love Egyptians and Syrians have for each other. So we had to show you and spread the love too!

The comments section of any Facebook post tends to usually be the most horrifying part of the process of scrolling through Facebook. It is usually where people break into fights and the conversation gets ugly.

However, the comments section of this last post we found was surprisingly refreshing and heart-warming.

AlMal newspaper posted one of their latest articles about the Syrians’ success in taking over the Shawrma market in Egypt.

The post was captioned by a quote from the manager of the Egyptian food franchise Arabiata who said “Syrians took over the Shawrma market in Egypt.”

And people’s comments on the post showed a tremendous and even quite surprising amount of love between both Egyptians and Syrians.

Egyptians poured the comments with praise of the Syrians in Egypt.

Calling them our brothers and sisters…

“They didn’t just take over the Shawrma business, they took over our hearts and souls”

“It’s their country, their home, and their place”

“We are the who should be thankful that they chose Egypt, Thank God for blessing us to be their second home.” 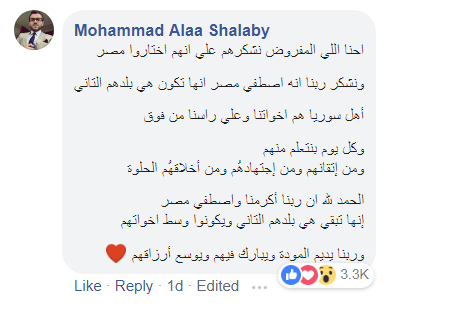 The love was only reciprocated from the Syrians’ side.

A lot were extremely appreciative and grateful for all the love and hospitality expressed by Egyptians in the comments.

The gratitude was endless.

The love and respect was sent even from Syrians outside of Egypt!

Watching all these beautiful sentiments expressed so genuinely and honestly was like a breath of fresh air.

Seeing the amount of love, gratitude, and appreciation on both sides was truly grounding and eye-opening.

We all knew that Egyptians and Syrians were brothers and sisters and that we all live together in peace and coherence.

However, because hatred and bullying has become the norm lately, seeing that love much shared between the two nations and witnessing it come to life in the form of some of the kindest and nicest words possible really gave us a glimpse of hope in the human race.

From our part, we thank everyone who took time out of their day to send love to their Syrian brother or sister.

We’d also like to follow in their footsteps and remind every Syrian out there whether in or out of Egypt, that our doors are always open to you, not as a favor but a God-given right.

Because -if we may quote one of the comments- Egypt is your country, your home and your place. And it ALWAYS will be!

Don’t let that streak of love stop with you, and send a message of love to our Syrian brothers and sisters in the comments!