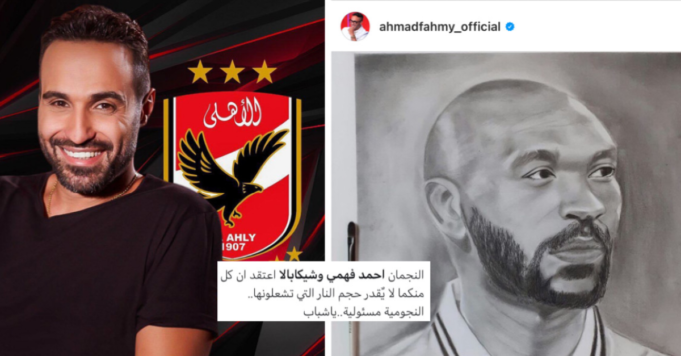 Last night, most social media platforms were going crazy over the recent incident that went down at a wedding between actor Ahmed Fahmy and Zamalek player Mahmoud Shikabala.

And since not many people are yet aware of what exactly went down nor the main reason for the actual feud; we’re here to fill you in on what we know so far.

Based on both Ahmed Fahmy and his manager’s words, as stated in a live Facebook video and a phone call on air with Amr Adib; it all allegedly started when Fahmy wanted to greet Shikabala at one of their common friends’ wedding.

Things quickly escalated and took a different turn when Shikabala started angrily blaming Fahmy for past drama related to the endless rivalry between Shika’s Al-Zamalek and Fahmy’s childhood club Al-Ahly.

At least, that’s how things seemed at the beginning and after a few words spread here and there…

However, according to Fahmy’s manager, the initial issue is that Shikabala had previously asked Fahmy to be a mediator between him and Al-Ahly so he could transfer there.

But when the club’s administration refused – which, obviously, upset the footballer, things went downhill between both friends.

Not to mention their previous social media tension that mainly occurred because of the usual and ongoing feud between the player and Al-Ahly fans, specifically on social media.

Fahmy claimed that he defended himself by telling Shikabala that he started the feud early on when he so deliberately insulted the fans; and that’s when Shikabala went on to insult them even further as well as Fahmy himself, who, in his turn, didn’t hold back.

Needless to say, as always, the internet was later split between Al-Ahly fans who appreciated Fahmy sticking up for them as one of their own, and Al-Zamalek fans, who, obviously, took their footballer’s side and opened fire on Fahmy and Al-Ahly.

So far, neither Shikabala nor his manager have come out to clarify things or tell their side of the story. The viral clip above is not really showing the whole truth as nothing could be clearly heard. Which is why we can’t really judge or take sides on this matter.

Besides, the whole “Fahmy being a mediator for an Ahly signing or a transfer” thing is not making sense. Why would he be a mediator, to begin with?

And why is Shikabala even blaming him if the refusal came from those in charge? Actually, why would Shikabala want to move to Al Ahly at all when his feuds with the fans and players of the club are endless?

We really do hope, however, that they resolve whatever is going on between them. And to be completely honest, we think that this rivalry needs to end once and for all, or at least be taken a little bit less seriously because as we can clearly see, things go too far and it’s not even worth it to lose a friend or make a scene at another friend’s wedding over this.