Identity Magazine
Home Trending How Did Myriam Fares Manage to Turn ALL of Egypt on Her?
Facebook
Twitter
Google+ 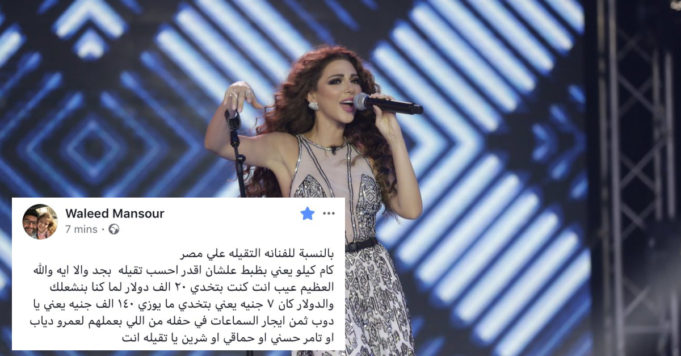 In a press conference in Morocco yesterday, Lebanese singer and performer Myriam Fares has made a questionable statement that caused Egyptians to open fire on her online, and we must say, rightfully so.

During the press conference, one of the reporters asked Myriam why she has been noticeably absent from the Egyptian concert-scene. Her answer was both surprising and illogical.

“Before the revolution, I used to have concerts in Egypt on a frequent basis. But after the revolution, I stopped performing there at all. The reason is that during that time I grew as an artist and and my fees have risen significantly so I became -excuse my honesty- “too much” and the cost of hiring me has become too high for Egypt.” Or in her words; “t2eela 3ala masr”.

Needless to say, Myriam’s words rang a bit too offensive for well… everyone.

It wasn’t long before people took it to social media to clap back at Myriam in defense of Egypt. The first to do so were Egyptian celebrities who rushed to school Myriam about how big of a mistake she’s done.

And well, it is safe to say, they didn’t hold back.

Then composer Amir Teima joined in by giving Myriam a quick history lesson on the magnitude and value of Egypt in the entertainment industry in the Arab world and worldwide.

“You’ve made the mistake of your life,” said singer, composer and actor Ahmed Fahmi keeping it short, sweet, and to the point.

However, the one that really didn’t hold back was singer Ramy Gamal saying “pay me what you owe me first”.

Of course, fellow celebrities were not the only ones to feel offended and infuriated by Myriam’s statement. People from all around the Arab world, not just Egypt were not about to let this remark pass un-noticed.

People lectured her about the names of celebrities and stars that have come and continue to come to perform in Egypt from all over the world to this very day.

People urged her to apologize, and fast.

And soon a hashtag that says “Egypt is too big for you” started circulating Twitter and going viral.

In conclusion, people were furious and DID NOT HOLD BACK.

Today, however, Myriam Fares went out of her silence and addressed the issue.

While we were in the process of writing this very article, Myriam Fares released a statement on Twitter addressing what happened and “supposedly” clearing it up.

She justified her statement by saying that this whole thing is nothing but mere miscommunication due to her “Lebanese accent”, then hinted that those who misinterpreted her words are trying to frame her and ruin her image.

However she still then explained her words exactly as people had interpreted them, repeating that all she meant is that her fees became too expensive for concert organizers in Egypt.

She then acknowledged Egypt’s huge role in her success and expressed her constant gratitude and appreciation to Egypt and its people.

She then apologized to the Egyptian people that she “misexpressed” herself.

After looking into the statement Myriam released, we must say we are left even more confused about what exactly she did clear out, seeing how she still confirmed what people had understood which is that her fees are too high to perform in Egypt.

But that’s just what we got. Which doesn’t really make a lot of sense…

Why what Myriam Fares did is not only offensive but also did not make sense?

For starters, this very year where Myriam said that she is too expensive for Egypt, Egypt has had and is still having performances for many mega international stars.

To name a few; Red Hot Chili Peppers, James Artur, Yanni, and Jennifer Lopez. And that’s just from the international side.

From the Arab side, several “A-listers”, including the likes of Nancy Ajram, Ellisa, Ragheb Alama and Wael Gassar, have had more than one concert here.

And those are only a few of the non-Egyptians stars who have come to perform to Egypt. There are, of course, our Egyptian megastars who have had several performances this year alone, like Amr Diab, Tamer Hosny, Mohamed Hamaki and Sherine Abdel Wahab.

So in all honesty, and with no offense to Myriam Fares’s work, it doesn’t really make any sense for the same country that could afford all these stars to not be able to afford her.

That being said, even if in fact, Myriam’s fees were too high for Egypt, it is inappropriate for any public figure to go out and insult an entire nation in public.

Especially, when said nation has a hand in any initial success that public figure had in the first place. Which is, undeniably, the case with Myriam Fares.

So in conclusion, whether she meant it or not, whether the intention was clear or not, the statement publicly made is still inappropriate. Therefore, an official apology is in order.