Throughout history lovers commemorated their love stories in all forms of art – poetry, songs, paintings and buildings. The charming Palazzo del Te in the suburbs of Mantua stands as a witness to the passionate love affair between Isabella Boschetti and Frederico II Gonzaga, the Duke of Mantua. Intrigued by the intertwined passions, aspirations and art within the fabrics of this monument, here is the story of the Palazzo del Te.

Frederico II comes from the ruling family of Mantua. When His father died in 1519, his mother, a powerful woman with education and connections, took over and advanced Mantua’s political position until Frederico came of age and became the Duke of Mantua in 1521.

Frederico II and Isabella had met around 1516; they were both approximately 16 years of age. It is not clear whether she was already married at the time or married later. In all cases a marriage between them was evidently not possible, however love was inevitable.

Isabelle was beautiful, that she was known as ‘la bella Boschetta’, and her intellect was obviously equally enticing. The love between her and Frederico II endured for a long time, despite the scrutiny of his powerful mother and others in court.

Frederico built the Palazzo del Te for Isabelle in 1525, where she was neither kept from the public nor was their affair ever hidden; in fact, the couple received and entertained guests together and the palace eventually became the location for official court affairs. The couple even had two children together, Emilia and Alessandro. And the impresa (symbolic emblem) of Isabelle and of Frederico was coupled in the palace’s La Camera delle Impresse, showing them as an integral part of the Gonzaga family to this day.

The Palace, where love and art are unleashed

Leisure palaces were common in Rome and Pompeii, adorned with scenes of sex, food and wine, to entice the spectators. So, it was no surprise that Frederico II, in an era of waked humanism in Italy, chose to build a pleasure palace in the style of a Roman villa for his mistress.

Frederico chose to build his pleasure palace at the family’s estate of Isola del Tel, at the outskirts of Mantua, where the family kept their horses. His choice of the architect was another enthralling aspect. Giulio Romano had just escaped a jail sentence for designing pornographic prints, when Frederico commissioned him to transform the family stables into a magnificent palace. But Giulio Romano was not only a troublemaker, he was a genius.

They say the Palazzo del Te is the creation of a madman. While in 16th century Italy classical art was revived and held in high esteem, Giulio played with it and went beyond it. His design rendered distorted perceptions like faux columns and symbolic rustications; through these visual tricks Giulio was able to give an impression of a building grander than it actually was. He created it with a ‘make believe’ concept, where paintings of horses and mythological heroes in action had a 3D effect. 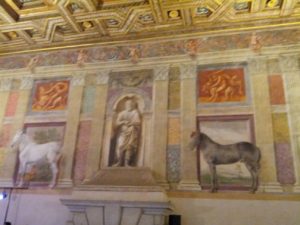 The Sala dei Cavalli (Hall of the horses) is the largest room in the palace, where receptions for important guests and ceremonies were held. It was designed as homage to the family’s wealth and status as the Gonzagas were renowned horse breeders.

But the leisure palace had to have a leisure room, and that would be the Camera di Amore e Psiche; the Hall of Love and Psyche, tells of the love between Cupid and Psyche and other mythological tormented love stories like that of Jupiter and Olympias. The metaphor of the tormented love brings visitors inevitably to the story of Frederico and Isabelle. The rich scenes of sex, eroticism and leisure makes it a 16th century masterpiece – and will always remind visitors that the Palazzo del Te was a lovers’ haven, after all. 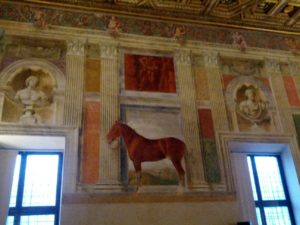 The Hall of the Sun depicts a marvellous fresco of Apollo riding the chariot of the sun and a ceiling with the alternation of the stars. The Chamber of Giants is the first of its kind in the world; the scenes are theatrical, vivid and highly animated and the room’s vaulted ceiling renders great sound resonance. In short, a walk through the variant rooms of the Palazzo del Te engages your every sense.

The work on this marvellous monument of love took 10 years. The palace was initially designed as a lovers’ haven, but eventually became a scene of art, culture and political aspirations in the 16th century. Today the Palazzo del Te is still so powerfully enticing, a masterpiece of architectural mannerism on the outside and a vibrant drama of passion, ambition, torment and triumph, on the inside. Giulio Romano employed his best talents to create a building that vividly painted the story that Frederico II Gonzaga wanted to tell the world, of his love, his family and his status.