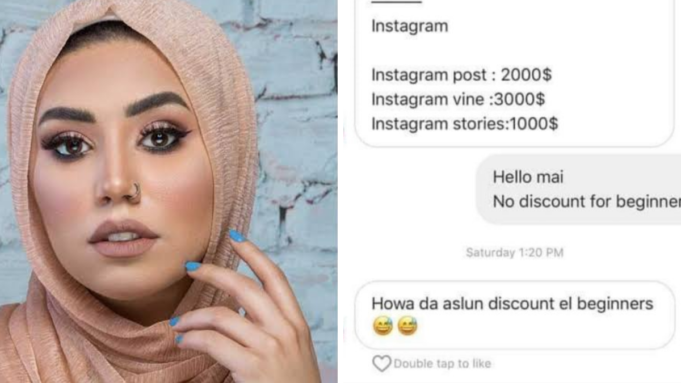 Ever since the 2010’s, Influencer Culture has been booming at an alarming rate. Like it or not, influencers are staying around for a while and we’ll just have to occasionally whine about it and learn to live with it.

It’s important to note, though, that there are degrees of whining about Influencer Culture. See, it’s acceptable to go through someone’s Instagram and go “oh my God, some people live like this!” but it isn’t acceptable to get in touch with them, get them to send information, and then post the screenshots everywhere.

Incidentally, this is exactly what happened with Mai Ibrahim, one of Egypt’s many influencers. Naturally, the screenshot spread like wildfire.

What isn’t natural, though, is that the screenshot sparked all kinds of reactions, some in favor of Ibrahim and others against her. We’re taking the former side and we’ll tell you why.

The people who stood their ground against Mai Ibrahim and all she stands for began their argument by saying she has no content, no depth, and no credentials to be charging that much money. We’d like to begin our argument by saying “literally, so what?”

You might be shocked to know this but being an Influencer is now considered a job. You know it — no, now you’re certain of it because we all know about 3 to 4 people trying to crack the code into the influencer world.

And here’s the thing, many people buy into Influencer Culture because it makes a lot of money, that’s just one fact no one can ignore.

You might be thinking, “yes, but come on, 2000 dollars is a bit much” and you’re right, actually, but you’re not the one paying the woman, who is just playing the Instagram game where you can charge up to 7K per post if you have a million followers or more.

We know the rates are astounding at first glance. We’re even more astounded because, well, we usually don’t judge influencers for their rates because we never really knew how much they charge. Mai Ibrahim’s rates are the first we’ve seen, and we’re pretty sure that if the price fit the client’s budget, we wouldn’t have even known Ibrahim’s rates in the first place!

Speaking of that client-turned-screenshot-leaker, we can’t help but wonder what the point was in all of this?

Sure, they might have been upset but is that an excuse to post that screenshot instead of venting to their friends over dramatic texts like everyone else?

We don’t really know the person or his motivation but it’s safe to say that you’re not supposed to leak things like these unless there’s something more sinister going on, as was the case of the girl who posted a video about influencer Ahmed Farag conning her out of 16K EGP.

This issue just blew out of proportion for no reason. Let people make their living and hate the game, not the player.