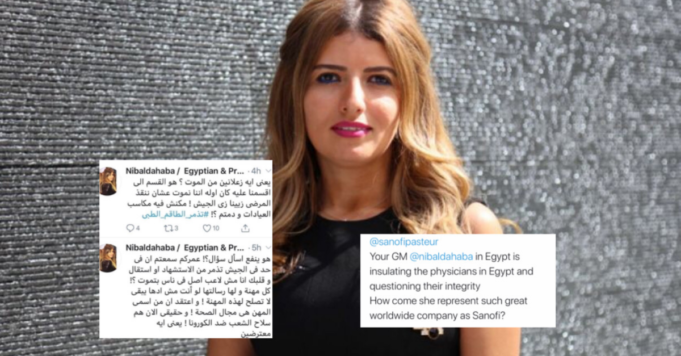 Over the last week, while many social media users took to their personal accounts to express their sadness and anger at the negligence that led to the tragic death of one of the doctors treating coronavirus patients at Al-Mounira Hospital, a number of people were bashing the doctors’ community for complaining about the inadequacy of protection measures – which often leads to the infection and death of some of them.

Amid all this drama, Nibal Dahaba, the general manager of Sanofi Pasteur Egypt, Sudan, and Eretria weighed in on the situation through her personal Twitter account, and that’s when hell so rightfully broke loose.

Sanofi is a French multinational pharmaceutical company with many branches all over the world, known to be a global health leader since 1973. It’s also worth mentioning that it’s the world’s largest producer of vaccines through its subsidiary Sanofi Pasteur – which is what Dahaba currently manages in the earlier-highlighted regions.

In her tweet, Dahaba attacked the doctors and health workers who are upset about their colleagues’ death and the maltreatment they’re subjected to during the current circumstances.

Most importantly, what initially drove the people of the internet to open fire on her is the fact that she undermined what most health workers in Egypt are going through at the moment.

As she basically took away their right to demand protection, be shaken up at the loss of fellow doctors, or even highlight what needs to be fixed; pointing out that if they do any of that, then they’re not at all fit for the profession.

Following her controversial words, a large number of people called for boycotting Sanofi until they indefinitely fire Dahaba for insulting Egypt’s health workers and doctors and of course, demanded an immediate apology from both parties.

Not long after the backlash, Dahaba deleted her controversial tweets and wrote a statement explaining herself and apologizing to everyone she offended. Sanofi Egypt also took to Twitter to apologize, clear their image and most importantly, point out that her views don’t represent their organization and its vision in any way.

The question here is where to draw the line? When is it safe to state your own opinion and be completely entitled to it on your personal social media platforms and when is it unacceptable to bash a whole community under the umbrella of freedom of speech, especially, when you’re an integral part of the said community?

To be honest, we can’t keep chasing people on social media for their controversial takes on whatever topics, but there’s always a fine line that cannot be crossed.

You can’t be a high profile figure in the health field and go on the internet to deliberately disrespect the health community of your own country and undermine their efforts and expect people to let it slide because it’s a ‘personal opinion‘. In this case, it’s definitely not!

It’s also worth mentioning that in Dahaba’s case, using social media responsibly is part of Sanofi’s policies and code of ethics, and having so publicly disrespected Egyptian doctors on the internet is considered breaching that policy.

And now that we’re in trying times, Egyptian doctors and health workers deserve nothing but all the love, respect and support for risking their lives in this unprecedented and disastrous situation.