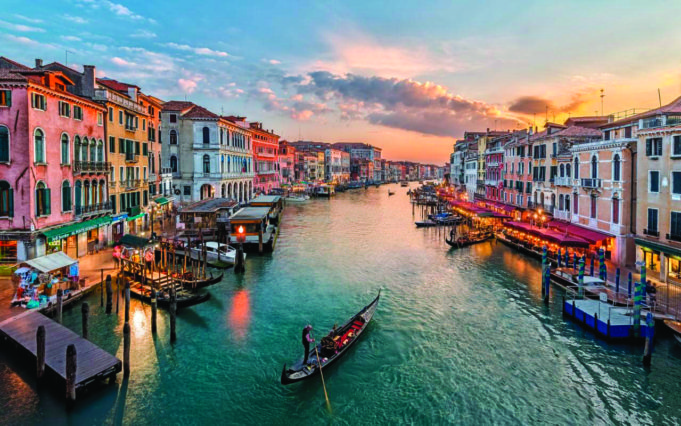 From a Refugee’s Haven to a City of Marvels

Many of us visited Venice or at least know of it, ‘The Floating City’. Built on water and connected by waterways and canals, Venice has a unique and charming vibe. Its marvellous architecture and artwork attest to its rich history as a maritime power, and wealth as a gateway for trading with the East. Today a large part of Venice is listed as a world heritage and it has become a top touristic destination, but many don’t know how it started. In this article, Identity recounts the story of ‘The City of Masks’ and ‘The City of Canals’, Venice.

Legend has it that Venice was created by refugees who survived the destruction of the ancient city of Troy by the Greeks. However, historical evidence recounts a different story. It traces Venice back to the 6th century, the time shortly after of the invasion of Rome.

The old city is made of a lagoon that is naturally shielded from outsiders; it cannot be easily penetrated by land because it is an enclosed bay, nor by water as ships can’t sail into its shallow waters. Initially, it was inhabited by a small community of fishermen. Then in the 6th century as the Roman cities were under attack by Germanic tribes, it was sought by refugees from the neighbouring countryside.

A Gateway to the East

When Rome fell, Byzantium controlled parts of the Italian lands including Venice. But in 751 when the Lombards took over Ravenna – the stronghold of the Byzantine Empire in Italy – the Byzantine Ruler became a Venetian Doge. However, it remained under Byzantine sovereignty and in return was allowed exclusive trading rights with the empire. But as Venice grew in wealth, trading with both the Byzantine Empire and the Islamic world, it also slowly gained power and independence. Its independence as a city state was final by 1082. Later, when the Crusades took place, Venice was a gateway to the East, but religion was not the only incentive – these religious wars in the East put Venice on the map like never before.

The Crusades was another great opportunity for Venice to expand. Venetians helped transport crusaders in exchange for money and eventually when the crusaders raided Constantinople, it gained Venice much wealth and control in the Mediterranean. Venice gained control of a substantial part of Constantinople, along with Crete and other islands of Greece, expanding its ports and naturally its trade. Venice’s victory against Genoa, its rival trading centre in Italy in 1380, left Venice an unrivaled trading power in Christendom. Venice was the first international financial centre – tradable bonds were first used there. And it was the European end of the Silk Road trade route which moved goods all the way from China. Venice was no longer a trading city state; it had become a trading empire.

Venice declined as a trading power around 1453 when Constantinople fell to the Turks and the Portuguese expeditions opened new trading routes in Africa. However, politically and culturally it was still booming. It presented itself as a republic and strongly advocated secularism defying the Pope at the time.

Venice has a charming natural setting but on top of that, all the wealth it accumulated over the centuries had translated into spectacular architecture. The Doge Palace is a complex building and an architectural masterpiece, and St. Mark’s Basilica is one the richest churches in Europe. Besides this, there are a number of historical palaces, monumental houses – and not to forget the traditional gondolas with their marvelous designs. Music, art exhibitions and theatrical performances especially during the festival, have kept the city vibrant adding to its charm over the centuries.

Venice was linked to the mainland for the first time in 1849 by a railway; it was flooded with tourists then – and it has been ever since.

“Every time I describe a city, I am saying something about Venice” Marco Polo