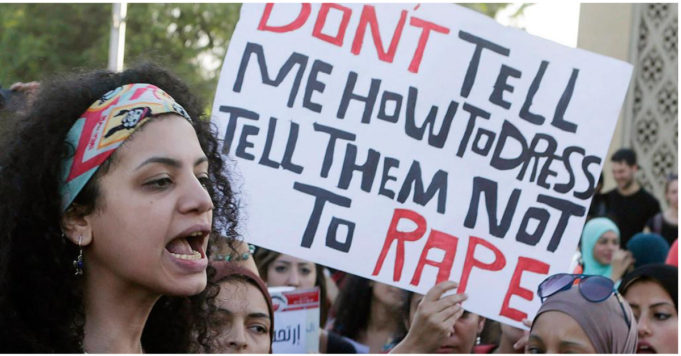 Women experience verbal and physical harassment on a daily basis in Egypt. In 2017, Cairo was dubbed “the most dangerous megacity for women” according to an international poll of over 10 million people.

Recently, there has been an awakening on social media with hundreds of individuals coming forward with sexual harassment and assault allegations against several people.

While it’s inspiring to see so many people coming forward with their own stories of harassment, there’s a lesson to be learned from this – we need to be talking more openly about sexual harassment, assault and rape.

Whether this is down to religion or due to social norms, these issues are considered a taboo in the Egyptian society. This can often mean that victims of such crimes are afraid to tell their stories out of fear of being disbelieved, disowned by their family, ostracised by society, or blackmailed and attacked further by their attacker.

It is for this reason that we need to normalize talking about the subject, sensitive as it maybe – we need to educate ourselves, our children, our entire society about the issue.

The first thing we need to address is victim-blaming – harassment, assault, and rape are NEVER the victim’s fault. They are always the fault of the harasser, attacker or rapist.

Regardless of our religious views, whenever we hear of a sexual assault case, our first question should never be any of the following:

All of these questions imply:

The words “unwanted” and “without consent” tell us that victims of these crimes are never, ever asking for it. If someone willingly and freely consented without being forced, pressured or coerced, then it wasn’t harassment to begin with.

We, as a society, need to better understand consent. It needs to be given clearly and without coercion for it to be considered consent. Consent, for one thing, does not mean consent for all things. Consent is reversible at any point in time. Disagreement, hesitation or silence do not constitute consent.

The second thing we need to emphasize when tackling this issue is that anyone can be a victim of harassment, assault or rape. While it is true that the majority of victims of such crimes in Egypt are female, crimes like these can be experienced by anyone of any age or gender.

One major problem is that society may view male victims of these crimes as “emasculated” or less manly. This is untrue, and will simply add to the psychological damage of the victim.

Crimes such as harassment, assault and rape can leave victims feeling broken and ashamed, and can severely impact their mental health. In our society, there is a heavy stigma attached to being a victim of harassment. It is not fair to add insult to injury by shaming them and telling them that this also makes them less of a man.

The third thing we must address is our society’s obsession with the idea of “virginity”.

In Egypt, being a “virgin” outside of marriage is synonymous with being “pure”. While this view may be damaging for many reasons, it is even more so with respect to victims of rape and assault. Victims of such crimes may be required to undergo “virginity” tests in legal cases of rape.

Suggesting that these victims are “impure” or “stained” may be extremely psychologically damaging to them – it suggests that they themselves are immoral, damaged or wrong, for a crime someone else has committed against their will.

Losing their “virginity” out of wedlock may also cause them to be shunned by their families and cast out of society, even prevented from marrying if a “virginity” test is carried out on them.

This means that not only will this victim have to live with the trauma from their assault, but will continue to be subjected to the torture inflicted upon them by society.

We shouldn’t be shunning these victims, we should be helping them to the best of our abilities to live as normally as possible following such horrific incidents. We need to put a stop to this societal branding of women with stamps of “impurity”, reinforcing the idea that the harassment they received is something they should never be allowed to recover from.

All three ideas, prevalent in Egyptian society, are harmful to victims of harassment, assault and rape. They can all mean that victims choose not to speak about their experience. Which not only means that the criminal cannot be tried and convicted, but also means the victim won’t receive the help they need to process the trauma they’ve experienced.

We all need to do our part to create awareness about these issues to help ensure that victims are properly supported and that criminals receive the punishment they deserve. Hopefully, this will help reduce the incidence of these horrific crimes, moving the blame to where it should lie.