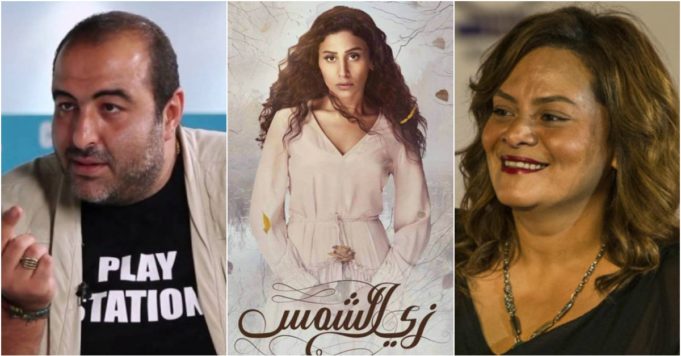 If you thought you’ve seen all the drama the new hit TV series “Zay El-Shams” has to offer on screen, think again! Because the off-screen dramatic conflict between the show’s director(s) is starting to steal the spotlight!

In case you don’t know, Zay El-Shams, starring Dina El Sherbini, Riham Abdel Ghafour and Ahmed El Saadany, is one of the front runner series this Ramadan. Mainly for its thrilling story-line, actors’ impressive performances, and topnotch production and direction.

So naturally, anyone involved in such a successful show has earned themselves some bragging rights. But apparently and according to the show’s original director Kamla Abu Zekry, the show’s new director Sameh Abdel Aziz hasn’t really earned that right!

Upon the show’s initial production, the prominent Egyptian Director Kamla Abu Zekry was chosen to direct it.

However, about a month before Ramadan, and after a lot of the show’s episodes were -allegedly-already filmed, the news of Kamla quitting and leaving Zay El-Shams started to spread. It was even reported that she asked for her name not to appear in the show’s credits at all.

After Kamla left Zay El-Shams, she was replaced by Egyptian Director Sameh Abdel Aziz, who -reportedly- picked the show up where Abu Zekry left it off. Therefore, Kamla’s work on the show was still intact.

Why did she quit?

There were a lot of speculations as to why. Some of which was that there were some issues due to the long duration it took Abu Zekry to film each scene.

While several sources reported that it was because of Amr Diab’s alleged interference with the soundtrack production and other directorial tasks.

However, none was confirmed because Kamla has chosen to keep her silence about the whole thing.

Up until recently that is!

The scene that caused the fight

After just a couple of days of airing, the show quickly drew everyone’s attention and landed quite high on people’s ‘shows to watch’ radar.

Especially, after the heartbreaking “cheating” scene where Dina El-Sherbini “Nour” confronts her fiance “Omar” -Ahmed El-Saadni- about his betrayal to her.

Dina El-Sherbini’s heartbreaking performance in the scene got everyone talking about the brilliance of the show and singing praise for everyone who worked on it.

High among that list was, of course, the show’s brilliant director. Who -according to the show’s credits- is director Sameh Abdel Aziz.

Sameh did not shy away from the light nor hesitate to accept people’s compliments on his amazing work in this particular jaw-dropping scene.

Which was apparently the feather that broke the camel’s back and triggered Kamla Abu Zekry to break her silence.

After Zay El-Shams made it to the top of this Ramadan’s series list and Sameh Abdel Aziz accepted credit for its direction, Kamla Abu Zekry was infuriated and outraged.

So she took it to Facebook to express her anger and frustration. 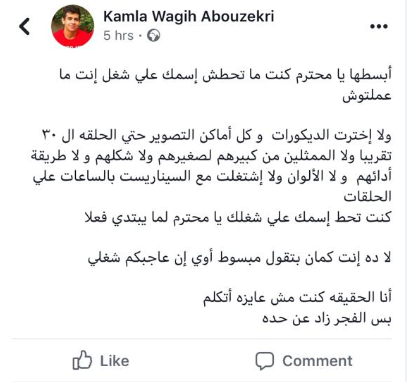 In her status, Abu Zekry clearly directs her words to Sameh Abdel Aziz and blames him for crediting her work to himself, and putting his name on it, referring to the ‘cheating scene’ in particular.

She mentions all the effort she invested in the show before Sameh even took over; from choosing the decorations to choosing the actors and working on the script.

She also points out that he should have put his name on his work when it aired, explaining that all the episodes that have aired so far are solely her own work, and not Sameh’s, including the cheating scene that grabbed all the attention.

Kamla then ends her status by stating that she never intended to talk about this whole thing, but she had to because the “debauchery” has gone overboard.

After publishing this status, Kamla gained the sympathy of the audience. A lot even stated that even though her name was not credited, her mark was quite obvious all across the show.

He replied with not one, not two, but three different replies.

1. At first, Sameh let his anger get the best of him and vented out his feelings in an angry, quite offensive Facebook status. 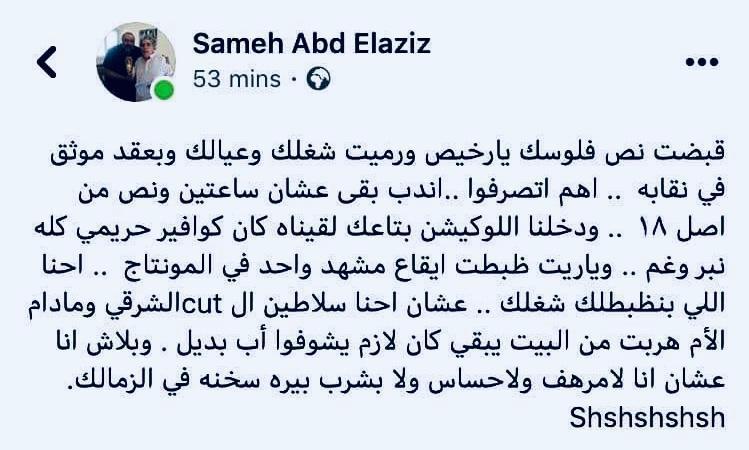 The jest we got from Sameh’s ‘first’ response -other than he is angry-, is that he threw out all of Abu Zekry’s work when he took over because -according to him-, it was not adequate. Aside from making several other personal remarks at Kamla’s expense.

However, Sameh didn’t leave that status up for long before he deleted it and wrote another one.

2. After deleting the first status, Sameh posted another, less hostile one. But it is safe to say that what it lacked in anger, it made up for in passive aggressiveness.

But, he deleted that one too!

3. Lastly, Sameh made it to the end of this emotional roller coaster of Facebook statuses he was on by finally reaching peace station, or at least publicly. 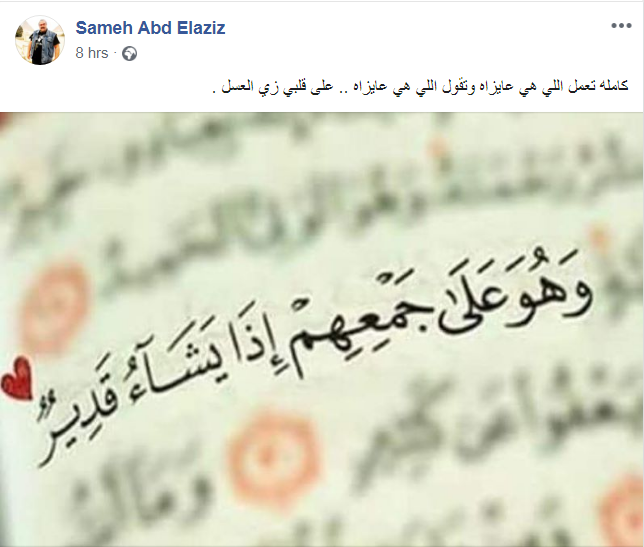 In this one, Sameh directly addresses Kamla Abu Zekry, saying that she can do or say whatever she pleases, and he’d be completely fine with it.

As of right now, status no.3 is still up, till further notice.

It is worth mentioning that just like a lot of people came for Kamla’s support, Sameh’s supporters did not hold back on showing him the love and support he needed through this ongoing feud.

While this very public tantrum from both sides is causing more controversy than one should hope, whether you are team Kamla or team Sameh, as of right now, there is no way -for us regular viewers- to know for certain who directed what and who should be credited for what.

However, one thing is clear, it is not normal for a TV series to have more drama off than on the screen.

So hopefully this all blows over soon, so we can all go back to focusing on the show, especially that it already has more drama than our hearts can handle.