Identity Magazine
Home Opinions The Story of How Non-Egyptians Judged an Egyptian for not Looking Egyptian...
Facebook
Twitter
Google+ 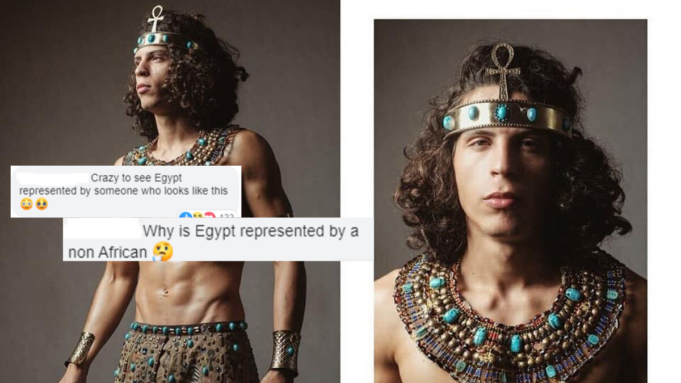 On September 26th, Mr. Global, a male-version of the Miss Universe competition was held in Thailand. This year, Egypt’s Adam Hussein participated and brought a lot of talk because of the costume segment part of the contest.

Since the story is too wild we’re not sure where to begin anymore, let’s start from the beginning.

Sadly, a lot of the talk Hussein attracted were negative comments by foreign internationals online. Nothing about his pose or anything. It was actually about his entire genetic structure.

Surely, if foreign strangers on the internet say Egypt’s Mr. Global candidate doesn’t look Egyptian they must be right, correct? Well, no.

Everyone Is Dying To Prove A Point That Doesn’t Exist

Ironically, Hollywood’s miscasting white people as Egyptians is one of the roots behind this misunderstanding. Naturally, this led to a false idea that white somehow equals light-skinned, even if features say otherwise.

Another reason as to why this happens comes down mostly to history, which several comments have tried to explain. The thing is, though, Egyptians know their history and they didn’t remain quiet.

After All The Memes, This “Debate” Remains

Much like we do with everything, we’ve turned the whole thing into a joke. Right after arguing and proving our points first, of course.

Everyone has an opinion on everything and one of the benefits of internet is that now you can spread it wherever you want, even when you shouldn’t.

Of course, these global citizens have their reasons that we’ve previously explained, but the fact remains that they’re arguing with Egyptians about how Egyptians should look like.

Let that sink in for a second. We’re being inexplicably identity-policed by strangers who aren’t even Egyptian just because they think they know better.

That isn’t the first time it’s happened, naturally, but now that we can argue against it, this trend can be on the way out.

We Have Our Problems, Sure, But This Doesn’t Invalidate Us

Egypt has a problem when it comes to complexions, we’re sure you noticed.

Entertainment is a land of no diversity, as are ads and even beauty standards until recently. These are all issues we’re working on as we set out to embrace our differences.

There’s no one way to look Egyptian, which some Egyptians actually didn’t seem to notice as they threw several dark-skinned citizens under the bus while defending Hussein.

Obviously, that’s wrong for all kinds of reasons, so we’re not going to unpack all of this now. However, we do need to know that there’s no manual and so whatever way you look shouldn’t be up for “constructive criticism”.

No one has a right to tell us what we should look like. We’re not only dark-skinned or light-skinned; we’re both and we’re everything in between.