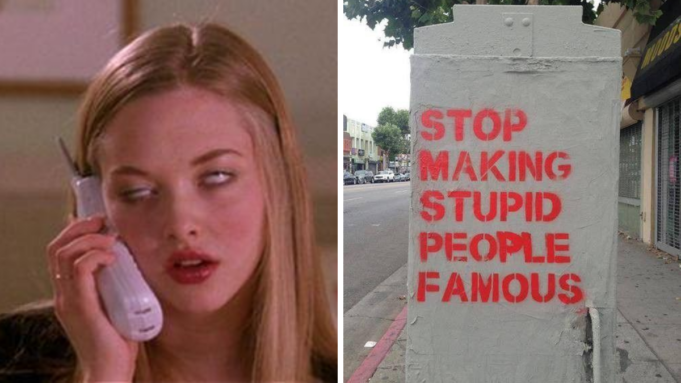 So, this is how some things go. Someone with a platform, whether little or big, will make some sort of highly controversial comment. People will be enraged and then will be split into two camps:

One camp will go into length about why the comment was A Bad Thing and the other camp will post about how you’re not to give these comments attention, in lieu of the whole “Stop Making Stupid People Famous” lens.

“But it’s a very straight to the point phrase“, you might say. Yes, but that doesn’t mean people aren’t misusing the hell out of it. So, allow us to tell you what it’s supposed to do.

When this phrase started being used everywhere as the go-to response, the Egyptian social media sphere was kind of in a weird place. Everyone was online and everyone was saying something and, as you know, we’re the type of people who tend to veer off into arguments.

And some people, you might also know, aren’t worth arguing with. Especially if they say things like “well, what was she doing there” and “he has a disability so of course he’s this-and-that”.

And that’s why this phrase was made — to literally stop wasting our time with pointless arguments with people who are being extra offensive to gain exposure points.

Somehow, though, people have stopped using this phrase as a way to nip offensive comments in the bud.

Instead, they started using it to deride content they don’t like and to stop important discussions from happening.

Think about it. How and against whom do you see “stop making stupid people famous” used?

We’re not saying you have to like every single just-for-laughs type of content online, obviously, but just don’t use pseudo-intellectualism to literally be anti-fun. Because, yes, that’s what you look like if you’re using it like this. Even if it’s not your intention.

And now on to the other things. The whole “highlighting issues VS giving proper exposure” issue. It’s more of the same old phrase-misuse.

See, here’s the thing. For progress to happen and for people to get the full story on things, you’ll need to talk and discuss. And, yes, some of the people you’ll talk about and discuss will be downright awful.

Discussing them and their behaviors, though, won’t be giving them exposure. And if it did, it won’t be exposure of the good kind.

It’d just be highlighting the issue more so more people would know why someone saying a slur/doing blackface/spreading hate is morally bad. And just how would talking about that bring anyone any kind of “fame”?

Once again, discussion and highlighting issues does NOT equal exposure.