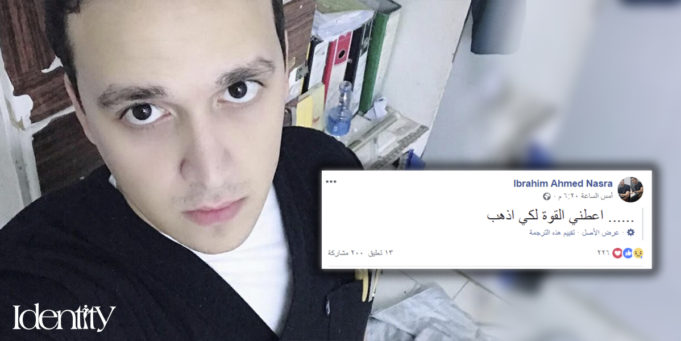 Suicide is a very tragic and sensitive topic to discuss. This is one of the main reasons why people try their hardest not to talk about it. However when the tragedy of someone ending their own lives strikes, it is not okay to keep denying it anymore.

This is what happened recently when the tragic news of a young psychiatrist committing suicide in Damanhour started spreading. The story as told through different sources of media is that Dr. Ibrahim Ahmed Nasra, a resident of the psychology and neurology department in Damanhour’s Educational Institute took his own life by throwing himself from the 9th floor.

Following the news of his suicide, some screenshots of posts Ibrahim had posted on his personal Facebook account started circulating on social media. The posts mainly expressed the severe depression Ibrahim was struggling with for quite some time. 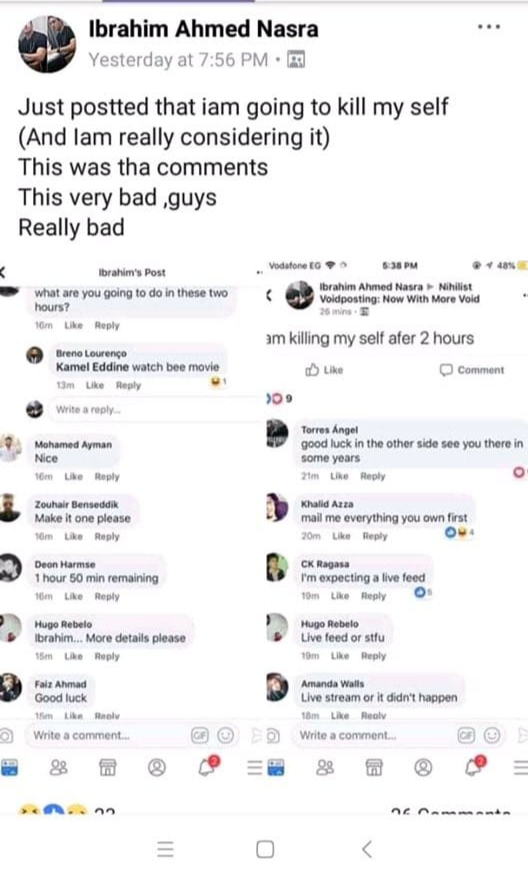 Among the screenshots was a picture of the very last post Ibrahim published on his account saying; “Grant me the strength to go…”

Surprisingly though, it was later reported that the coroner ruled Ibrahim’s death as an accident, not suicide.

This sparks an even more threatening issue that is rooted in our Egyptian society. It is the way we choose to bury our heads in the sand and hide the truth about suicide. Whether he jumped or slipped, the undeniable truth is that he was clearly struggling when he was alive. 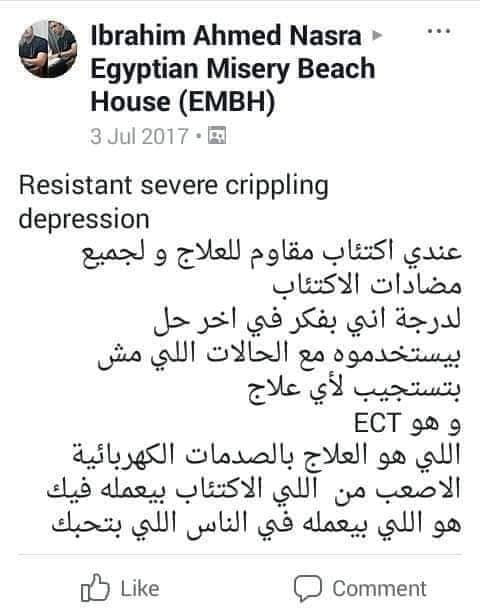 Maybe he did slip, maybe he wanted to jump but hesitated at the last second, or maybe he actually did jump. The reality is that we can never know for sure because Ibrahim is gone and so are all those who struggled through their lives till they just chose to end it. Yet, we only seem to care about sugarcoating the ugly truths so we can keep living in denial.

This is not new and Ibrahim is not the first nor will he be the last to suffer silently then leave our world struggling. According to the World Health Organization, suicide is the second leading cause of death among 15-29-year-olds worldwide. Egypt “officially” ranks as number 143 in the world in suicide rates which calculates for 4 suicide cases in every 100,000 people. And these are just the official records.

However, because of traditional values and the stigma put on suicide in Muslim countries, there is significant underreporting of suicide. So much so that there is NO formal statistical documentation of suicide in Egypt. What is even more saddening and dangerous is the fact that if a suicidal person actually tried to get help, they won’t be able to because Egypt currently does not have a suicide hotline!

Denying the existence of a problem will not make it go away. Calling it something else will not soften its blow. But facing it head-on and trying to find a solution for it might eventually do. As a psychologist, Ibrahim knew more about the human mind and mental health than the average person. However he still severely struggled with his own. It is too late for him, now, but we can use his example to open our eyes and try to make a change. Don’t wait till it’s too late for you or someone else, act NOW! If you are struggling, ask for help! You need it, you deserve it and there is no shame in asking for it.