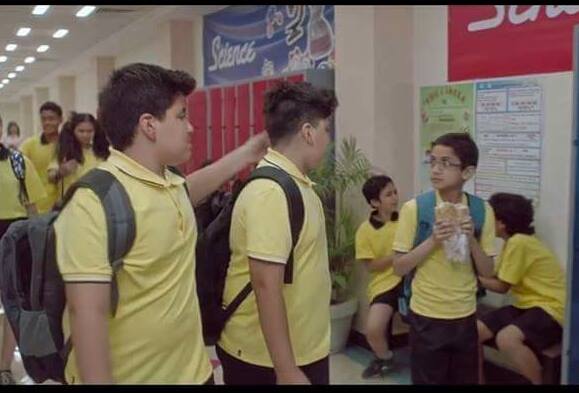 As Ramadan is the time of year when all agencies bring out their best knowing millions are watching, we waited for this year’s TV ads to conclude which made it and which were a total fail! Every year, there is that one ad that keeps popping up whenever you switch channels, and another that creates a controversy. This year, 3 ads made it to the epic fail list and had a negative social media buzz; Vodafone/UBuy and Beit El Zakah. Here is everything!

Ghada Adel sings proudly about her kids starting to fast for the first time. While they are walking at school, hungry, a kid beside them is eating, so they give him ‘A Look’!
People went ballistic about that look, clearly it is not appropriate to teach our kids to give that despicable look to anyone who does not follow our beliefs. Maybe the boy was not Muslim or was still too young to fast. Kids should be taught to respect others!

Dalal Abd El Aziz visits a woman living in a rural, unprivileged area. While the woman takes Dalal to take a look at the water they use for drinking, Dalal gives a look of disgust at the water and just tells the woman ‘ma3lesh ma3lesh’.
People were furious at Dalal’s look, being so inconsiderate to the woman’s feelings. Her response did not add a lot to the woman’s case or the audience’s thoughts; it was simply unacceptable. As a response to the negative feedback it received, Sheikh El Azhar ordered the ad to be banned!

The ad starts with a girl crying and a voice over telling her that she’s crying because her boyfriend is now happy and having a good time with someone else, and then suddenly the voice
says nothing could make you feel better except a Jimmy Choo shoe/bag.
People were offended that the ad features women as air heads and shallow, portraying them as materialistic creatures with no feel for important issues or people. This is yet another slip in defaming women.

Unintentional or pure inconsiderate, ad agencies should have some respect for the millions watching TV. Kids learn a lot from what they watch, and giving such messages will have a huge impact on the younger generations. Our society is full of wrong beliefs and its time we took a stand in changing the norms.